JAMES CAMERON and the Curse of 24 Frames Per Second 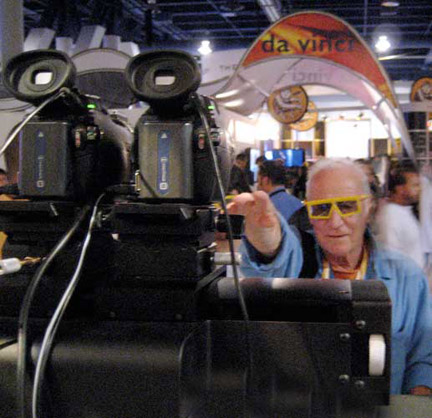 I'm at the TRUE3Di stand at NAB. My 3-D hand is poking me in the face.

I stay at Circus Circus. Why?
1: I’m cheap. It’s cheap.
2: It’s on the free bus route. I hate the not-free, crowded monorail. I’m always standing.
3: If you miss the free bus or there’s a long line – it’s a quick walk from Circus Circus to the Convention Center.

The only drawback to Circus Circus is that the non-NAB guests are all vastly overweight with annoying children wearing pink, plastic shoes. I’m sure if you did a bodyweight comparison, the iBod, with, say, the Bellagio guests, you’d find an iBod of +40 lbs.

Today there’s a long line for the bus. I decide to walk. Others join me.
I have my name tag on.

“Hey, you’re Stefan Sargent! You wrote that MAD AS HELL 24p article”
“Not me. My brother. We have the same names.”
“No dice, dude. I’ve seen your photo in DV magazine. So what’s wrong with 24p, dude?”
“I just said that the raw 24p output from the Canon HV20 was jerky.”
“You should have said that CineForm Neo HD would fix it.”
“But that was the whole point. Why buy a camera that needs a fix? Anyhow CineForm Neo HD is 599 bucks.”

He’s joined by two colleagues. I can see the Convention Center in the far distance. I walk faster.
“Dan, this is the twerp who wrote that anti-24p article”
“It was crap. You said it took 16 steps to fix.”
“Actually I was just quoting an expert, who seemed to know what he was talking about.”
“I export from FCP to After Effects then back to FCP. That’s 1-2-3 steps.”
“Gimme a break. I just want to go to the NAB Dog & Pony Show.”

I move into a slow jog. Can’t shake them off.

“Yeah. And you don’t know shit about shutter speed and frame rate. You said 60i was a shutter speed.”
“OK. OK. A senior moment. My bad.”
“24p is Hollywood! Right guys. We’re DV Rebels!”
“Enough! Let’s stop walking for a moment and get real. Lighten up. 24 frames a second was a compromise chosen in the 1920’s – we’re talking 80 years ago. Your grand parents weren’t even born. Radio had just started, no TV, no internet, no Cherry Garcia.” 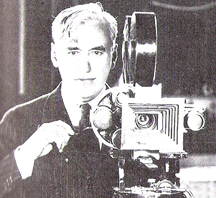 Mack Sennett, his hand on the flimsy camera hand crank.

At last we have stopped walking and they are listening.

“Most people think silent movies were 16 frames a second. But they weren’t. The cameras were hand cranked. And get this, when the prints were delivered to the cinemas they had a cue sheet. The projectors were variable speed. “Run this scene at 25 frames a second.” Or “Slow down this scene.”

Mack Sennett, his hand on the flimsy camera hand crank.
You can’t hand crank sound movies, there had to be a fixed speed. The faster the film ran the better the audio quality. But faster meant more film and that’s expensive. Too fast: expensive – too slow: poor sound. 24 is a compromise. It wouldn’t happen today with digital cameras and digital projectors.”

I don’t know why, the atmosphere has changed. We start walking again.
Now it time for THE BIG GUNS.

“James Cameron says 24 frames a second sucks.”
“No way!”
“Honest; he’s in last week’s on-line Variety magazine talking about “the curse of 24 frames a second.” (Read it here.) Cameron agrees with me. 24 fps is yesterday’s technology.”
“THE James Cameron?”
“Yep. Terminator. Titanic. He says 24 fps strobes and judders. He wants a new standard of 2K at 48 fps. He claims that 2K at 48 fps looks as sharp as 4K images at 24 fps – but without the strobing artifacts.”
“I love 24p. It’s better than sex.”
I murmur, “Get a life.”

At last, we are at the Convention Center. “Nice meeting you,” I say and scurry inside and flip my name tag over.

Just for the record, here’s a snip from Cameron’s April 10 Variety interview:

For three-fourths of a century of 2-D cinema, we have grown accustomed to the strobing effect produced by the 24 frame per second display rate.

Some people call it judder, others strobing. I call it annoying. It’s also easily fixed, because the stereo renaissance is enabled by digital cinema, and digital cinema supplies the answer to the strobing problem.

Increasing the data-handling capacity of the projectors and servers is not a big deal, if there is demand. I’ve run tests on 48 frame per second stereo and it is stunning. The cameras can do it, the projectors can (with a small modification) do it. So why aren’t we doing it, as an industry?

Because people have been asking the wrong question for years. They have been so focused on resolution, and counting pixels and lines, that they have forgotten about frame rate. Perceived resolution = pixels x replacement rate. A 2K image at 48 frames per second looks as sharp as a 4K image at 24 frames per second… with one fundamental difference: the 4K/24 image will judder miserably during a panning shot, and the 2K/48 won’t

. Higher pixel counts only preserve motion artifacts like strobing with greater fidelity. They don’t solve them at all.
But 4K doesn’t solve the curse of 24 frames per second. In fact it tends to stand in the way of the solutions to that more fundamental problem. The NBA execs made a bold decision to do the All Star Game 3-D simulcast at 60 frames per second, because they didn’t like the judder.

So where were you James, last month, when I was being flamed for saying 24p is old hat? Some friend.

Back to NAB.
What’s new inside? Not much. RED’s Scarlet is vaporware. Pity. I was expecting more. It looks awful. 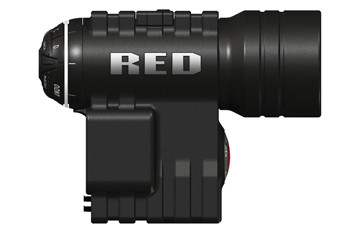 I loved my 16mm Éclair. It was part of me. You could never say that about a RED 4K or the little 3K Scarlet. The ergonomics are awful. Scarlet is not a camera for me. 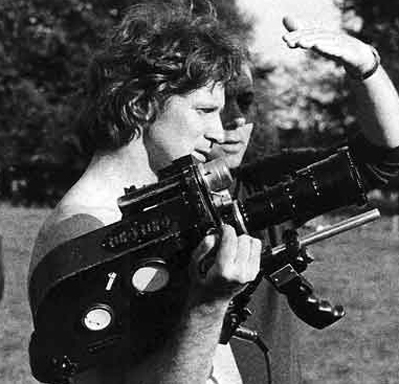 That's me with my 16mm Éclair NPR. It could sit on my shoulder all day. How come the Sony EX1 and RED Scarlet got it so wrong?

The new boy at NAB is 3-D Stereoscopic movies. I’ll make a 3-D short myself this year, just for fun.
The 3-D in the Content Theater show I saw on Monday looked wonderful. You couldn’t fault it.
Today, I visit Quantel to see the 3-D Pablo demo in their private theater. The sun (you know, big yellow thing in the sky) in 3-D stereoscopic. Incredible.
The demo is hosted by Mark Horton, an ex-colleague of mine. He worked for both of my London video companies 20 years ago. Says they have sold 10 3-D systems in Los Angeles and three in the U.K.
3-D is here. This time, it really will happen.

The Iconix / 3ALITY 3-D contraption - it's dead. No camera hook-up, no power to the control unit. It wouldn't be too hard to wire up the cameras and show us a stereo image.

The Iconix / 3ALITY 3-D contraption – it’s dead. No camera hook-up, no power to the control unit. It wouldn’t be too hard to wire up the cameras and show us a stereo image.
Quantel’s excellent 3-D show over, I go upstairs to the Iconix stand. Their 3-D demo was shot from a helicopter and is showing on a consumer Samsung 3-D DLP HDTV – see the new sets here.)

Not working for me. Eye strain and dizziness. Ouch! Around me, people are saying, “Awesome.” Someone is telling me about the problems of shooting stereoscopic from a helicopter. Means nothing to me. Half an hour ago saw sensational 3-D and this isn’t.
“What’s it cost?” I ask. “Two Iconix @ $16K?”
“No, no. With the 3ALITY stereo 3-D rig and the Flash XDR recorders, well over $100K.”
Not today, thank you.

Downstairs is a 3-D demo by TRUE3Di using two LCDs and a mirror. It looks far better than the Best Buy Samsung DLP upstairs. But nowhere near as good as the projected images I’d seen at Quantel or the Content Theater. Disappointing. Sorry. And you took such a nice photo of me.

Seems that 3-D doesn’t work too well on a monitor in ambient light. My new-found friend, James Cameron, agrees:

It should be remembered that good 3-D requires a more immersive relationship between audience and screen. Unless you’re willing to sit within 4 feet of a 50″ monitor, which all but a few geeks (like me) will not do in a home setting, then you’re not going to get the same bang for the buck out of a 3-D movie on a home system as you would in a theater, regardless of whether the resolution of the image is the same.

I wander off. I’ve been coming here since 1977. I miss the old times.
Where’s Ampex? Where’s CMX? Where’s RCA?

Come to think of it, where’s Apple and Avid? It just ain’t the same!
I’d planned to stay three days but two’s enough. 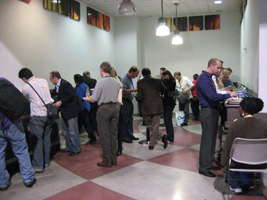 This is where you are meant to eat. What a sorry site. Note the light that doesn't work!

This is where you are meant to eat. What a sorry site.
I’m reading “The Tipping Point” by Malcolm Gladwell. You’d like it. About how small changes can create huge changes. Gladwell interview here.

A couple of years ago Digital Juice Inc, a relatively tiny company (which you can find here., said, “I’m as mad as hell and I’m not going to take it anymore.” They pulled out of NAB. Did it affect they sales? Nope. In fact, it seems to me that it gave them extra cash to do more promotions and deals. Only yesterday, I bought more of their StackTraxx multi-layed music discs. A steal at $99.95 for four. I now have all 44 StackTraxx.

Now Digital Juice and the two big As: Avid and Apple are gone. Who’s next? Adobe? Microsoft? Quantel? Panasonic? Maybe. Stranger things have happened. Could be “The Tipping Point”? There is a small revolution happening here. Watch out, NAB.

NAB needs a clean up. For the visitor, it is just too much. It’s hard to find a guide to where things are. Sure there’s a heavyweight directory to exhibits but the stupid book has no map. That’s somewhere else. Wherever it was, I never found it. So I’m looking for stand SL7828 (Convergent Design). Must be near row SL77, but it isn’t. It’s way over there.

The toilets, the eating facilities are a disgrace and there’s almost no WiFi. Time for someone from Disneyland to come and try to make sense of the user experience. It used to be fun. Or am I just getting old? Will I return? Probably not. Bye, bye, NAB.

And now the big payoff. They didn’t know I was going to write this:

I went to DV Expo last year. I paid for my own airfare, my hotel, meal and taxis bills.

For someone like me, in active video production, DV Expo beats NAB. Hands down!

This entry was posted in 2008, Production Notes. Bookmark the permalink.