2010 SPRING CLEANING It’s spring. It’s spring. Tra la! The end of the big freeze and the approach of summer. Now to throw out the old and welcome the new.

New? Yes, this year I’m going to take the HDSLR plunge — maybe the new Canon Rebel T2i or the Fujifilm FinePix HS10. I can’t wait for a new toy — but first to throw out the old.

So what’s to go this year? Film cameras, that’s what. I’ve got four still cameras. Haven’t used them for years. I chuck them into the kitchen bin. Tricia rescues them from the plastic liner and cleans them up ready for the local Salvation Army. They won’t sell one.

Who needs film these days?

Don’t get me wrong. I love film. Film supported me for 35 years. I bought houses, sent kids to school, traveled and lived well — all because of film. “Daddy, buy me a pony.” 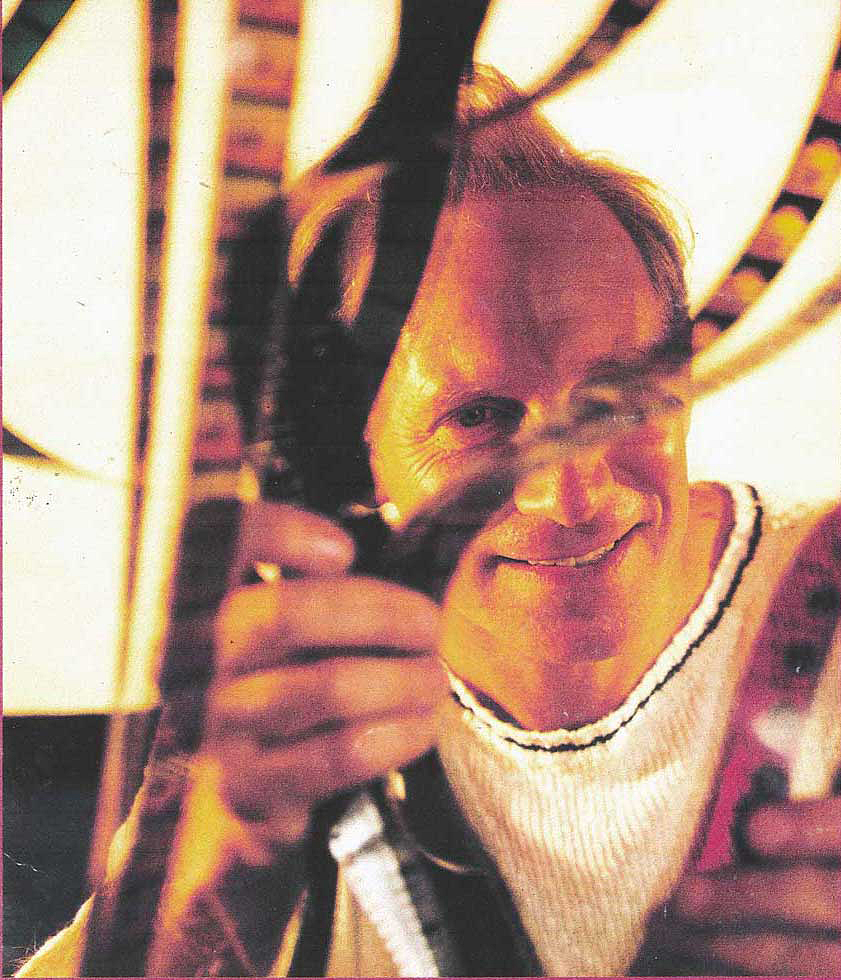 That’s me in 1983. I’m as happy as Scrooge McDuck playing with his money. See the light of madness in my eye… the quivering lips… that’s how film gets you. Touch it, feel it, I can see pictures, lots of little pictures.

BACK TO SPRING 2010 Just as I was musing this thought, the who-needs-film-these-days? thought, the unexpected happens. Tap, tap, tap. A knock at the door. It’s Mary, our neighbor from Beach Drive. She’s excited; tells me she’s rented her house to a film school and they’re there making a film.

A film! Of course she means video. No matter.

I’m dragged off. Enter Mary’s house, or what’s left of it. It’s worse than I’d imagined. Banks of Kino Flo fluorescents light up the place – they are everywhere. Lights shining through every window. All the natural daylight gone, washed out. Who teaches these kids?

“Shooting HD?” I say to the student DP.

“No we’re shooting film. So much better than tape.” The poor kid then launches into the digital-is-such-a-pain-in-the-ass speech. I called it D.S.P.A. “Film has so much better latitude. Has that real, nitty-gritty texture you can’t get on tape. I mean tape is too sharp, too plastic.”

Nice boy — sad: he hasn’t a clue. With all the money they’re spending on renting an Arri BL plus film stock, processing and telecine, they could have got a RED or a Sony CineAlta F23 and maybe learned something useful.

My theory is that teaching RED/ F23/ F35 is way beyond the skill level of the school’s faculty, so they teach film and dead, easy HDV. A real cop out and a waste of fees for the students. A degree in ancient history would be more use. Let’s get honest, that’s what they’ll have when they graduate. 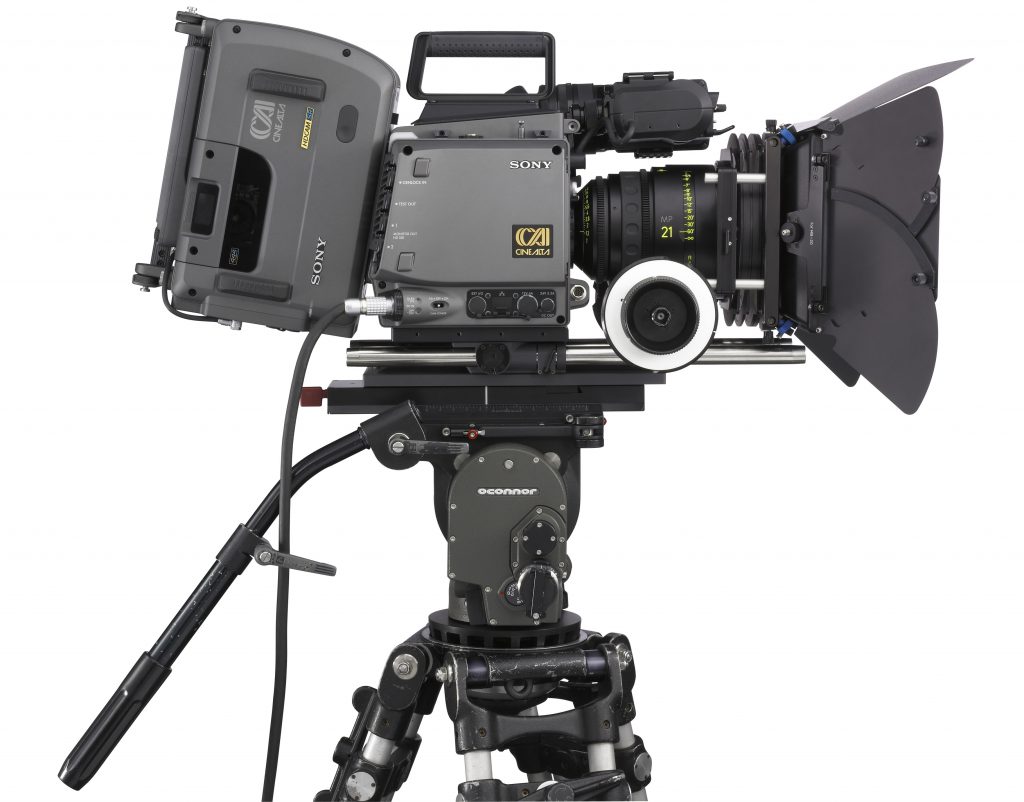 Sony CineAlta F35: Too good, too high tech, too expensive for film schools?

I knew I shouldn’t have come. Just gets me angry to see time and money wasted.

I escape — still musing about “who needs film.” In the mailbox is Kodak’s INcamera magazine.

The know-it-all film D.S.P.A baby cinematographer and now INcamera magazine, all in one day. A double whammy…

INcamera seems to think that the only way to promote productions on film is to rubbish digital; big time… no holds barred. A kind of warped religious fervor you’d never find in a real magazine, like DV or American Cinematographer.

Instead of getting useful production info, you’re hammered with outrageous D.S.P.A statements:

Funny, I used to like Remi. Way back in ’64, Remi Adefarasin and I worked together at the BBC Ealing; at least I think we did. He was an assistant cameraman, my focus puller. Can’t be two Remis, can there? He seemed very sane and rational at the time.

I quote from other Kodak-brainwashed DPs.

PAGE 10: “The texture depth of film suited Wilfred’s world perfectly and enabled me to be intuitive on the set.

PAGE 12: “There was some discussion on the outset about shooting digital or HD format. I really didn’t want to do that since we were outside so much and you never know what you are going to get into.”

…we were outside so much? It’s hard to take seriously, isn’t it? “you never know what you are going to get into.” This guy’s a real worry. What’s so scary about being outside?

PAGE 15: “I know we could never have gotten the same results had we shot digital.”

I can’t bear to transcribe nonsense anymore. You get the message, it’s all D.S.P.A speak. 46 pages of jingoistic advertorial — page after page. On the back cover, they actually print shooting digital is such a pain. I kid you not. Thank God — they draw the line at “in the ass.” Finally, a little restraint.

Wow, and there I was happily musing. Out goes INcamera into the kitchen bin. First sacrifice of the 2010 spring clean.

SANITY CHECK
Just in case you kind of believe in D.S.P.A, here are some well known folk who might disagree:

SPRINGTIME FOR SARGENT
Got to get back to my annual clean up. There are strict rules: “If it isn’t used in the last two years, chuck it!”

Behind my editing table are two boxes of BNC to BNC cables. While audio has remained true to XLR, video has moved to “interface” connections like SATA, USB, HDMI, DVI; you name it. Anyhow I don’t need two boxes of dusty, old fashioned cables. Out they go!

Next, my FireWire drives, I’m all eSATA now. I’m throwing out 200 GB Firewire drives – why, because I’ve standardized on 2TB SATA (Seagate Barracuda) at just $194.95. They’re 10 times bigger, cheaper and faster. I copy the data and chuck the FWs. Another few years, the 2TBs will be out of date, replaced by solid-state 1000TB. I’ll copy and chuck again (but only in spring time).

MY 2010 LIBRARY
It’s painful to throw out books, there’s a feel-good factor about having an impressive reference library. Get real, Stefan, when is the last time you read PHP for Flash? Who needs a book about MX2004, aren’t we on CS4 now? PowerPoint 2003, huh? There’s an entire shelf of Dodo books.

Ten years of Wired magazine. I advertise them as free on Craig’s list; not a single reply. Out into the re-cycle bin. Wired is now green. Will return here one day as National Geographic or perhaps Shopper Offers from Safeway.

Cinefex magazines dating back to 1983… Maybe I can sell them. I e-mail our editor, David Williams, for suggestions. Nope, he’s got the same collection. Seems there’s a glut of old Cinefex mags. Shame, and they cost $10 a copy, but I’m not reading them, so why waste valuable shelf space?

2008 SPRING CLEANING Two years ago, come The Great Spring Cleanup, I copied my all CDs to MP3 and threw them out. Another five shelves emptied, plus all floor space under the bed.

Then I went for the DVDs. All those copies I bought on Amazon when I was flush and hundreds of illegal copies I’d pirated and never viewed.

Sure, one day, one day, I’ll want to watch the French Connection II. Maybe not.

“Are you feeling all right?”

I copied them all, every last one, on to 2TB drives. I can fit about 350+ DVD movies onto one 2TB drive. At 70 cents a DVD, you know it makes sense. Put the bare drive into a wiebeTECH storage box for safekeeping. I can sleep soundly knowing I still have And God Created Woman ready for me, night or day.

I don’t throw out everything. On the shelf near the front door, I keep the boxed DVD sets of Kieslowski’s Three Colors Trilogy, BBC’s Planet Earth, The Bourne Collection, Fantasia, The Matrix Trilogy and Looney Tunes. They look so impressive.

“Wait ‘til you see my hard drive.”

I even keep Ken Burns’ jazz show — the boxed set from Costco. “Hey, you’re a jazz fan too.” Confession: I never watched it right though. The talk to music ratio was too high and all those Ken Burns’ effects.

1995 – REMEMBRANCE OF SPRING CLEANINGS PAST
I’m fed up buying film stock, going to the lab with exposed neg, collecting the cans and cutting copy the next day, neg cutting and/or telecine transfer… I crack. I swap from shooting film to tape mid-stream, right in the middle of a production. I just say “no to film” and quit. Disenchanted at springtime, that’s me.

Both my Éclair 16mm cameras, an NPR and an ACL, have to go. I give them to Pete Anway at Birns & Sawyer in Hollywood. He sells them, no problem. I use the money as down payment on an Avid.

YEAR 2000 With my 16mm cameras gone, I’m desperately clinging on to my precious 35mm Arri IIC. I need it for my great indie feature film. It’s my comfort blanket. 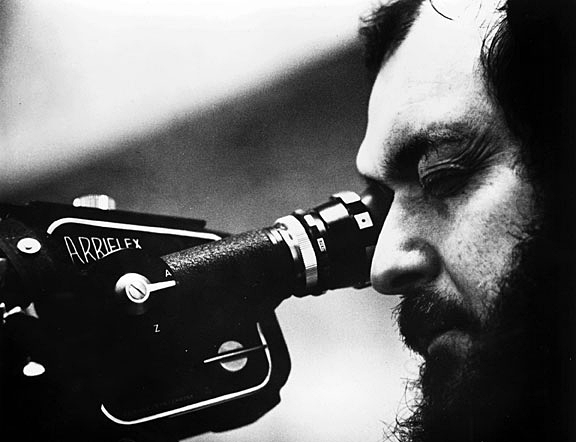 Kubrick’s Arriflex IIC. They thought he was framing up a shot but he’s really asleep.

The Arri IIC was the RED One camera of the 1960s. Kubrick’s Clockwork was a IIC shoot. Easy Rider, IIC again. Herzog’s amazing Fitzcarraldo, another IIC.

You weren’t a real filmmaker if you didn’t have an Arri IIC on your shoulder and a Spectra exposure meter around your neck. 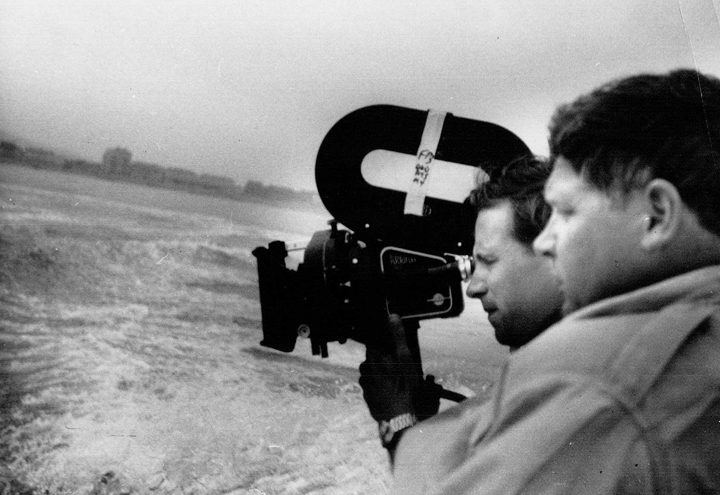 Me again. Shooting Ken Russell’s Debussy in ‘64. Oliver Reed is out of frame. Yep. It’s a IIC.

Between 1995 and 2000, dinner guests are forced to hold my camera and look through the viewfinder. I tell them that this is the very same camera that shot Easy Rider. 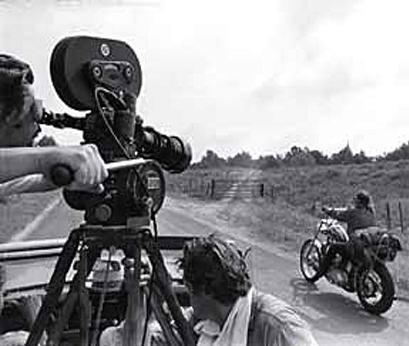 Kovacs shoots Easy Rider. Looking through a viewfinder on a moving car is the easiest way to get a black eye. Been there. Done that. Ouch!

I go to BestBuy and order two huge freezers for my precious stock.

I know it’s crazy. I think if I have all the 35mm filmmaking kit, the script would somehow appear. People would find me. “Hey there’s this great guy with 100,000′ of film and an Arri IIC.” Just doesn’t happen. I will have to write the script myself.

I take Robert McKee’s three day course. That should do the trick. Nope. Buy every screenwriting book there is. I keeping repeating G. K. Chesterton quote, “If a thing’s worth doing, it’s worth doing badly.”

Hmmm… I don’t know about that. My scripts are bad. Really bad. The good thing is, I know they’re bad.

2001 IT’S SPRING AGAIN Come the big spring clean, both the IIC and the film stock have to go. They’re an embarrassment.

The Arri IIC camera is snapped up. I’m glad it’s gone; I’m busy shooting with my Sony PD150, a real digital camcorder. Money is coming in. My clients are happy. I am too.

Here’s the weird part: he’s shooting a feature but can’t afford the ground UPS delivery; wants it sent by Greyhound bus. I go to the bus depot in San Francisco but the film is too bulky for one bus. I have to make three separate trips and fill up three buses.

Good news. I double my money. I guess it all arrived. Not a word from him. Not a squeak. Did he make the film? I don’t think so.

I fondly imagine that he resold the 100,000′ at a healthy profit. It’s now a permanent moving 417 cans of hopes and dreams.

A FAREWELL TO FILM And so ends my life of filmmaking, well at least the kind with the sprocket holes down the edges.

Digital Video, take me. I’m yours.