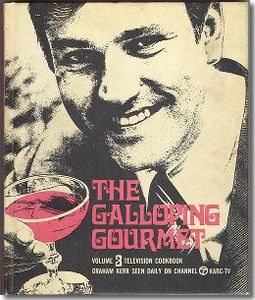 SYDNEY AUSTRALIA June 1968
“A party, a party, hey Graham just asked us to his garden party.”

Graham has a local Sydney TV show called “The Galloping Gourmet.” I made the opening titles and, from time to time, I’m booked to shoot some outdoors sequences: Graham in a wet suit coming up out of the water with a very dead fish on the end of his spear (he bought it from the fishmonger an hour before).

Graham in the Australian bush shooting a rabbit – soon to become rabbit stew, well not that rabbit, but who cares, it’s only daytime television.

I like Graham, it’s always fun working with him. Ooops, it’s the phone again. “Hey Stefan, Treena came up with a good idea. I was going to take some shots on my Canon Scoopic but I’ll be busy cooking. If I give you the Scoopic can you take some shots – just home movie stuff; would be nice to have a record of it?’

Two days before the roasted pig barbie; “Graham again – been thinking, can you bring your Éclair – so much better that the 100ft Scoopic. Oh, and I think it would be a good idea to shoot in color.” Dear Reader, at this time Australian television is in black and white – so shooting in color is unusual. “Graham, I don’t have any color stock.” “No worries since you’re doing this as a favor, I’ll buy a roll or two. Tell me what to get.”

“Sorry to keep phoning but this party is going to be amazing. I’m building a special spit – can you come over this afternoon and film The Galloping Spit Builder… One more thing: tomorrow, get here early – I’d like shots of the house and garden and then we see the guests arriving.”

On the day: “Stefan, besides shooting the barbie, I’d like shots of the wine, Len is bringing over his best bottles. Shots of pouring showing the labels, people drinking but I don’t have to tell you. Tanya Halesworth is coming – you know her, great – some shots of her enjoying the barbeque.”

“How’d it go – I hope you managed to enjoy yourself? I kept a plate for you but somebody took it.”

Yes friends, by the time I’d finished shooting the barbie, the wine, Graham, Tanya, the beautiful people… all the food had gone.

“Stefan, I’m really sorry you missed out. Come here next Sunday and I’ll cook up something special just for you – no camera required.”

LONDON 1990
My daughter’s best friend is Anna, daughter of Rosemary and Miles.

We’re at their place. It’s Miles’ birthday and the table has about ten other guests. Much of the dinner talk is about Rebecca, Anna’s big sister; she’s getting married next month. We’ve been invited to the wedding.

“Stefan, you will film it, won’t you?”  Rosemary has chosen a moment of silence at the table. All the guests, my daughter, Anna and birthday boy Miles, are waiting for my response. It’s an out-of-the-blue surprise.

“No Rosemary, I won’t film the wedding. I’m not a wedding filmmaker.”

The table is now dead quiet as Rosemary and I are locked in battle. “Rosemary, I make corporate videos, that’s my profession. I’ve made a strict policy not to do free videos for friends, it’s as simple as that.”

“No, I don’t do weddings – period. Give a camera to one of the groomsmen or book a wedding videographer. Please don’t ask me again.”

Dinner party conversation starts again. We finish the meal. Go into to their living room for coffee.

At the front door, “Stefan, I’m sorry if I upset you. We’ve been good friends, Anna and Cissy are so close – perhaps you’ll reconsider your decision.” “No Rosemary, I will not film the wedding. I’m sorry, I won’t change my mind.”

A week later a letter arrives:

We asked too many people to Rebecca’s wedding and have decided to cut back on the numbers. It is with regret that we have withdraw our invitation. I hope you understand.