THE FINE ART OF THE CONTRA DEAL Jul ’07

Sydney, Australia, 1963. I’m freelance, but based at TCN Channel 9 in Sydney. I make program titles, inserts for shows, and pop videos for the Australian version of Bandstand. Warwick Freeman, the show’s director goes to see the station manager, Bruce Gyngell.

“What do need more money for?”

“Add a credit line, ‘Bandstand Drives Hertz.’ Pick up a car tomorrow. What else?”

“Be smart, Warwick. Have a teenage fashion segment. Get free clothes.” 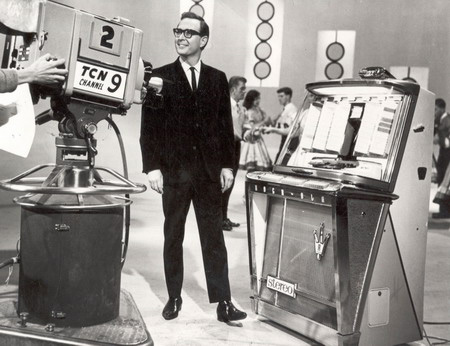 Host Brian Henderson on the set of Australia's Bandstand. Brian, Warwick and I have free clothes, a free speedboat and free gas.

The closing credits of Bandstand get longer every week. Need a week off in Fiji? “Bandstand Flies Pan Am.” Hotel Rooms? “Bandstand Stays at the Suva Holiday Inn.” How about a speedboat for Warwick and friends? Easy–Pride and Evinrude give us one for the show. And to top it all, in every waterskiing film I shoot, we show our speedboat being fueled from a BP pump. Free gas!

New York, 1985. A day off. Walking down Broadway, I see a boat shop. My friend in Australia collects boats. Has them hanging in all his sheep shearing sheds. He keeps buying boats and hanging them. The sheep love them.

I go in. The shop is empty. The owner targets me. “You look like a Klepper Kayak person. Let me show how it goes together.” He up-ends two bags full of wooden bits and pieces and begins to construct a 17-foot kayak right in front of me. I love it. Got to have one.

London, a week later. I phone the UK agent. “I need a Klepper.” He tells me the price–$4,500 with all the extras, including sails.

“I make corporate videos. How about I make a video for you?” I list some of my clients: IBM, Mercedes, General Electric…

“Sounds good, but have you made films about speedboats?”

It's raining, the water is choppy, and I'm balancing on the edge of the boat with a rented $40K Betacam SP. See it on my Web site (www.stefansargent.com).

“Funny about that. I must have made 20 speedboat films. My specialty.”

Exmouth Harbor, two months later. The Klepper agent, David Green, has organized the local SOE (in the U.S., read OSS) guys to demo the kayak. I shoot it from David’s latest design, a stealth speed boat called the Skua. We find a stony beach to assemble the Klepper kayak. The SOE guys wade into shore with Tricia and me over their shoulders.

I shoot the Klepper and then the Skua–which is designed for military covert operations and can sink under water, out of sight, to be raised again on a radio signal.

Sadly, today it sinks on cue but won’t come up.

David goes back to the drawing board. I finish the video without this novel feature.

One corporate video = a Klepper kayak with sails.

San Rafael, Calif., June, 1999. My son wants to go to a drama school to learn both acting and fencing. We meet the principal, Peter Meyers. He tells me that the classes are $650 a semester. “Peter, have you ever thought how beneficial a videotape would be?” I tell him about IBM, Mercedes and General Electric…

“What about films for schools?”

“Funny about that. I must have made 10 or 12 for colleges. I made a half hour for the Department of Education and Science, another for Central St. Martins College of Art…My specialty.” 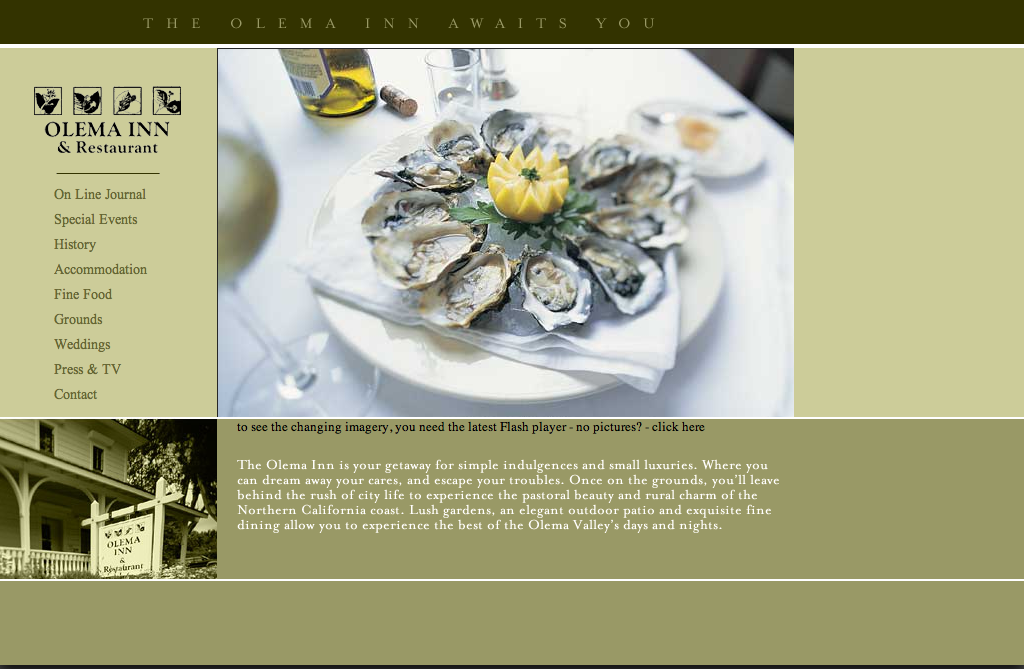 They get a Web site, Tricia and I get free food. A win-win solution.

One corporate video = three years of drama and fencing tuition.

Marin County, Calif., May, 2007. It’s Sunday. We drive to the Olema Inn for lunch. Let’s start with oysters and champagne. Won’t cost us a thing. I designed their Web site (www.theolemainn.com).

A word of caution: contra deals are subject to tax. Talk to your accountant. Perhaps he needs a video or a Web site himself.