Way back in 1958, Bert Stern had a multicam shoot at the Newport Jazz Festival. Jazz on a Summer’s Day took just a few days to shoot, but six months to sync up the cameras and the sound. It was “a very painful and difficult process,” Stern once said.

He never made another movie. If only he’d had today’s technology.

Nob Hill Masonic Center, San Francisco, July, 2007. Here on another Summer’s Day, I have a multicam shoot. Louis Armstrong couldn’t make it, but no matter. We have Dr. Graham Powell, Professor Emeritus of Civil Engineering, UC Berkeley. The lecture is about “nonlinear modeling and analysis for performance-based design.” Huh? Where’s Louis?

I set up two Sony V1U cameras, side by side, halfway up the center aisle. On one I’ve switched on the internal X1.5 digital telephoto—that’s my close-up camera. The other I’ll use for the wide shot. I operate both cameras, but the wide is really locked-off until question time.

The venue has supplied an IATSE cameraman, Dimitri. He’s good. I put him on the stage with a third V1U. Tricia gaffer tapes his tripod to a spreader with wheels. I tell Dimitri he’s free to get the best shots—audience shots, close-ups, wide shots, reverse angles of the presenter—by repositioning the camera during the show. We switch off his red light so that it doesn’t distract the audience.

I’ve reset the timecode on all three cameras to “FREE RUN.” Now, here’s how to sync up the cameras in a jiffy. Get a Sony RMT-841 remote control. Power up the three cameras, hit “TC RESET,” and bingo—all three timecodes go to 00:00:00:00. The cameras will stay locked even when you change tapes. Magic. Eat your heart out, Bert.

The sound is coming from the PA mixer. Now for a secret weapon: a Shure A15AS XLR audio pad. If you’re getting a feed from a PA system, a pad is essential. They may say they are sending you line level, and then blast you clean away. Just as well that I brought a XLR gender changer. The feed was XLR female—how is that possible?

At every hour, Dimitri and I change tapes. I have a cute Sony DR60 disc unit on my close-up camera. I only want to use it when I’m changing tapes, so I run it manually before the change and stop recording once the new tape is running. 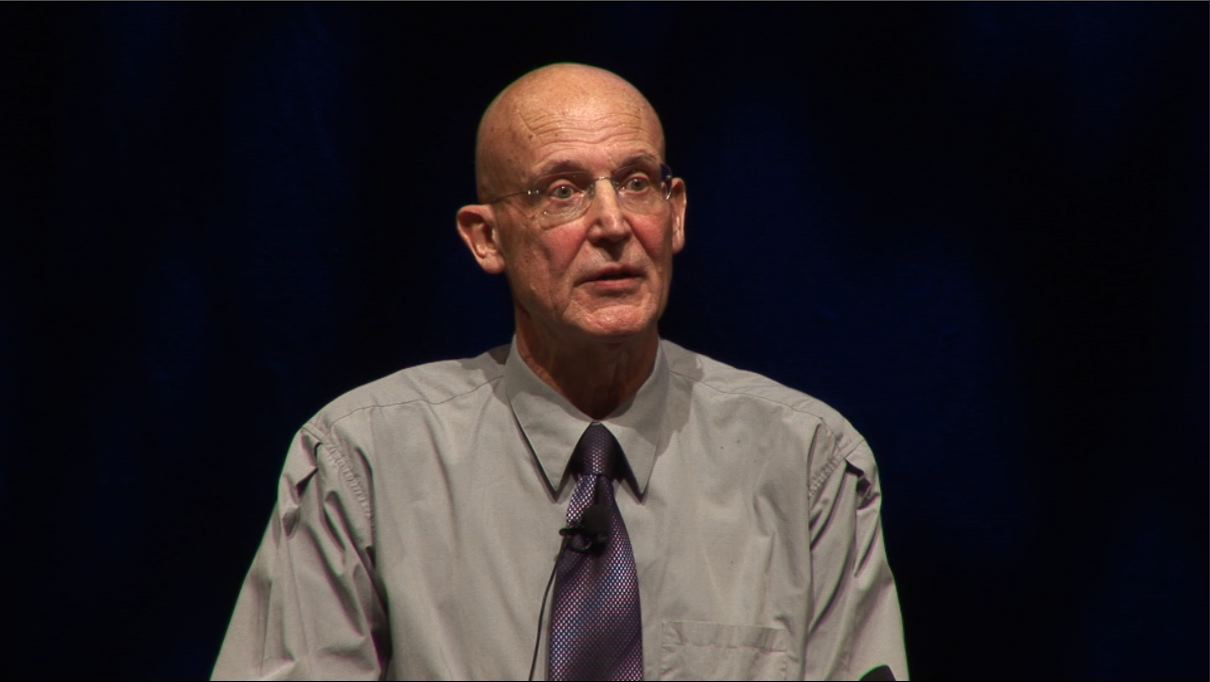 Dimitri’s on-stage camera has rolled into a position where he can get a good shot of the presenter when he turns away from the audience and looks up to the PowerPoint slide on the screen. My two cameras only see the back of his head, so that third, on-stage camera is essential. Come question time, Dimitri has good shots of the audience.

When it’s all over, I whip out my Memory Stick and grab a copy of the PowerPoint file from Dr. Powell’s laptop. No real secret. The trick is: always carry a Memory Stick. Back at base, today’s shoot has produced 22 one-hour DV tapes and one tape copied from the DR60 disc drive. Good labeling is essential. I wouldn’t be without my Brother PT 1830 labeler.

Although we shot HDV 1080i, I do this edit in standard def. I use a Sony M25 desk player, feeding its HDMI output into a nanoConnect box from Convergent Design, and the SDI output into my G5 via an internal BlackMagic DeckLink HD card. I also have an external BlackMagic HDLink, but that’s only for monitoring.

The view from Camera 3 on stage.

Now all I have to do is edit six hours of a totally incomprehensible technical seminar. I do this in real time using Final Cut Pro’s multicam and a glass of cabernet. With the multicam edit complete, I switch to merlot and cut in over 350 PowerPoint slides. It’s tough checking an edit that runs for over six hours, so I ask my client to help. Hey, just one wrong slide and a three-second black hole. Easy to fix. Time to make the DVD menus and burn two dual-layer DVDs. Six hours on two DVDs. Amazing.

As a thank you for the celebratory champagne, I make a no-charge 60 sec. promo. See it at http://www.csiberkeley.com/Powell/DVD/.