My first NAB piece was a fun review of the LAFCPUG’s SuperMeet, my second is where I found my 2010 OMG spot and here’s my third and final piece. No surprises, it’s about 3-D at this year’s NAB.

The great thing about NAB and all the associated events like SuperMeet is that everyone comes away with their own discoveries and chance happenings. It’s different for everyone. 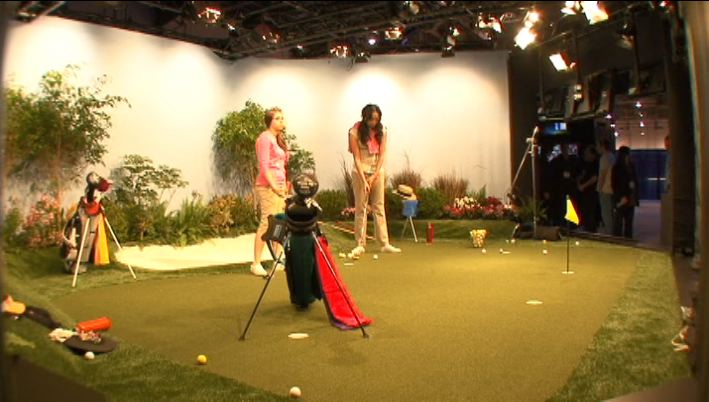 The people I feel sorry for are the boys and girls stuck in the exhibit stands. This year in the Sony 3-D set there are two models playing mini-golf, hour after hour after hour, for four and a half days! 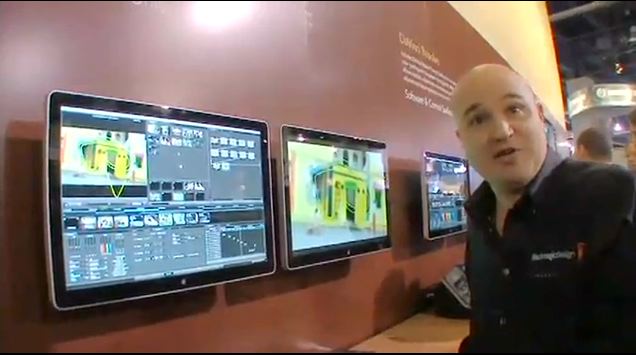 And there’s Peter Barber stuck in the Blackmagic booth, doing the same DaVinci demo time after time, answering the same god awful questions, time after time. “Can you buy the $995 software and just use a mouse?” Yes, apparently you can, and there are some cheap control surfaces in the works. Does he mean iPad? He’s not telling. 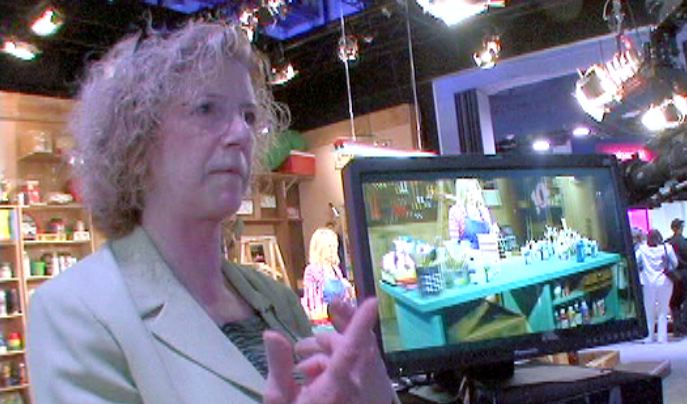 Panasonic’s 3-D line business manager Jan Crittenden (above) is already frazzled on Wednesday morning when I had a firm appointment with her. Throughout our filmed interview people keep interrupting Jan with questions. How much? When’s delivery? Can’t they see I’m shooting? Go away!

Interview over, Jan tries to make an appointment to see a prospective buyer and discovers she doesn’t a time slot left in her diary. “Can you come to our office in Secaucus, New Jersey?” She’s not joking. He shrugs and slopes away.

DID JEFFREY THROW UP?
Talking about chance happenings: I’m walking down the long never-ending corridor in the North Block and see a line of people sitting on the carpet obviously waiting for an event. As I’m passing this pathetic line, I enquire, “What are they waiting for?” “A talk by Jeffrey Katzenber but you’ll never get in.”

Then out of the blue, an NAB person appears and says, “Marge, he’s got a NEWS MEDIA badge.” I’m duly led away and placed the VIP line. It’s still a line but we are standing upright and all wannabe VIPs.

The crazy thing is I was only asking, never wanted to see Katzenberg (the CEO of DreamWorks, as if you didn’t know) or to be in this privileged line. To be honest, I was looking for the Rest Room. And it’s there, right next to our line. “Can you keep my place?” 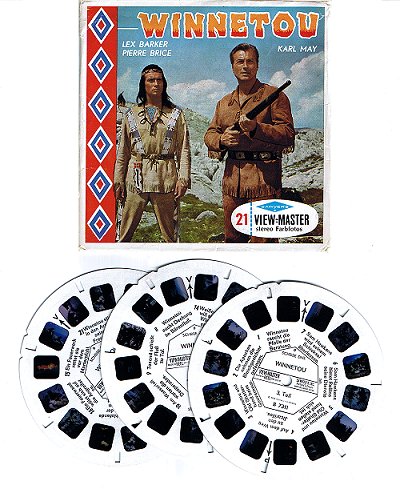 Once in, I plunk down in the front row. Always interesting people to talk to. On my left are two 3-D veterans from the View-Master days. They’ve been working in stereoscopic 3-D for 30 years and now it’s all happening again. We chat and then the show starts.

The first thing that’s odd is that David Wertheimer, the guy asking the questions is facing the audience which means that the star turn, Katzenberg, is either in profile or back of head. “Hey David, we want to see Jeffery – not you.” Having shot a zillion interviews, I’m tempted to stand up and ask them to swap seats.

Poor Jeffrey K. (not actually poor, at last count he’s worth $800 mill.) – poor Jeffrey had got real with the editors of Variety magazine and said some home truths that must have offended his Malibu colleagues. He badmouthed both Warners and Warner’s studio chief Alan Horn over their decision to hastily release Clash of the Titans into awful, pretend 3-D and then charge moviegoers an extra five bucks. DreamWorks is committed to 3-D and Warners let the team down”

We’ve seen the highest end of 3-D in Avatar and you have now witnessed the lowest end of it in Titans. You cannot do anything that is of a lower grade and a lower quality than what has just been done on Clash of the Titans. It literally is “OK, congratulations! You just snookered the movie audience.” The act of doing it was disingenuous. We may get away with it a few times but in the long run, moviegoers will wake up. And the day they wake up is the day they walk away from us and we blew it.

So now he’s here at NAB to, well maybe, say sorry. But he doesn’t. He skirts around the issue of Titan by saying that 3-D is the industry’s greatest opportunity, a shot in the arm, the goose that laid the golden egg but we must keep the standards high.

During the following Q&A, a brave audience member says the T word, Titan. Mr. K. replies, “I’ll pass on that.”

Next question is about converting 2-D into 3-D. The questioner is horrified that his beloved Citizen Kane might one day become Citizen Kane in 3-D. Jeffrey says that conversions must be done with the involvement of the original artists and filmmakers, says that Lucas and Cameron are, respectively, working on 3-D tests of Star Wars and Titanic.

“I’ve seen the tests on one of them and it’s spectacular.” A conversion takes at least a year and a half to do with a budget of at least 20 million.

Technology is moving fast. “You will in five to seven years to see medium to small size 3-D TV monitors without glasses,” he confidently predicts. 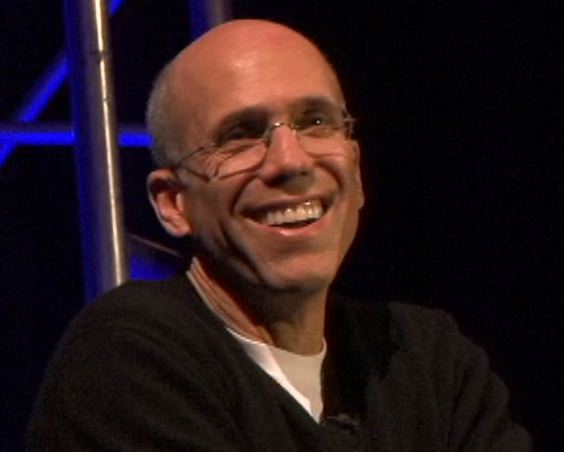 The final question comes from a person who had taken a friend to see a 3-D movie and the effect had made his friend ill. Katzenberg acknowledges that a small percentage of people can’t handle 3-D.

Ages ago I made films about flight simulators. The flight cockpit is mounted high on hydraulic pistons. The pilot sees a simulated image of the outside environment. If the visual landscape tilts, the pilot expects to feel the plane lean too, that’s why the simulator has the motion system.

When I was shooting, the motion system would be turned off. The pilot always felt nauseous. I guess 3-D is the same. The eyes are giving information to the brain which is expecting additional input but doesn’t get it. The result is that queasy, seasick feeling. Hasten Jason, bring the basin.

“I’ve always worried about a business which as a result of doing it you makes your customers throw up?” jokes Jeffrey. “I have a sensitivity to highly, highly active 3-D. At our studio I’m the bar they come to find out…”

“Did Jeffrey throw up?” quips David.

A few years ago, I bought two new HDV cameras to shoot HiDef. Out of 15 clients in the Bay Area, how many have wanted a HD Blu-ray copy? Answer: exactly none. I’m having a hard time stopping them from ordering VHSs.

I bought extra speakers and amplifiers for Dolby 5.1. Again, zero interest from my client base. I simply can’t imagine any existing client of mine wanting 3-D. I hope I’m wrong. 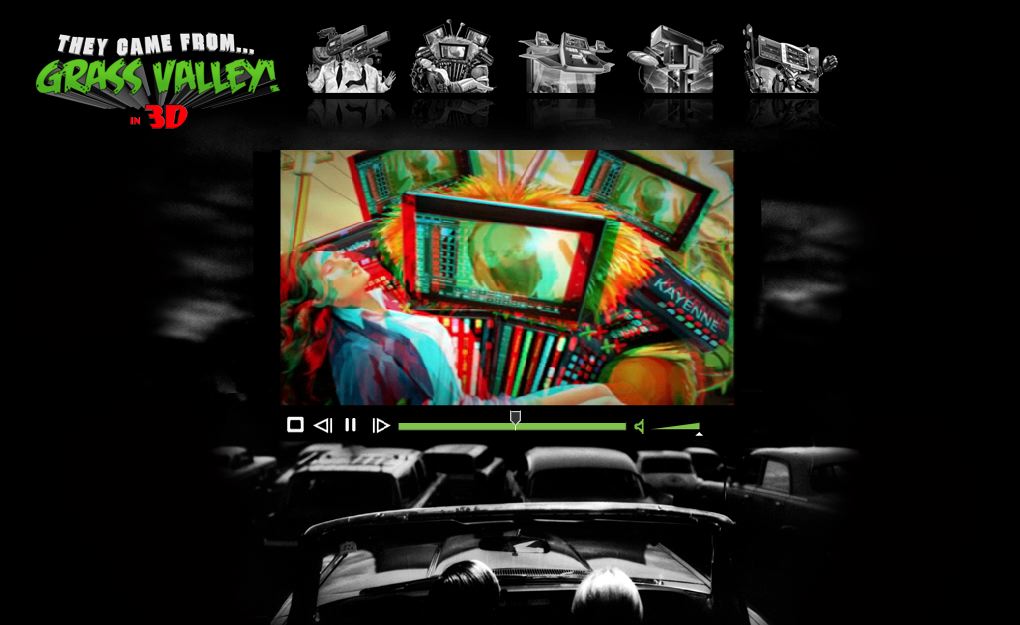 Grass Valley excelled with this imaginative presentation. Quick get out your red and cyan (not blue) anaglyph glasses. No glasses? Make your own here.

The unstoppable Blackmagic Design announced their 3D capture and playback board – a snip at $995. 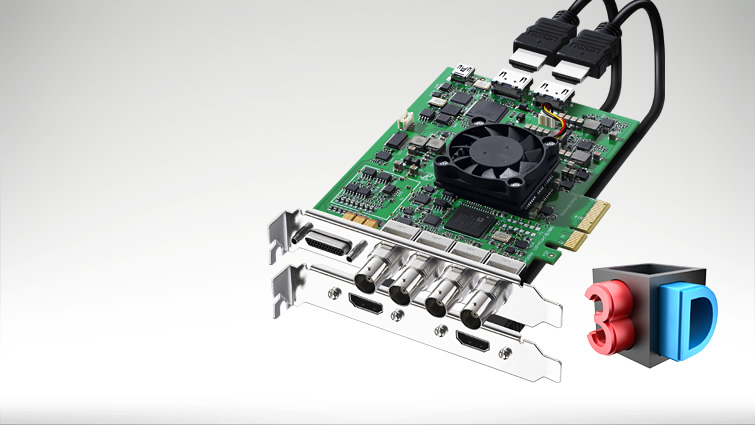 And everywhere I look there are 3-D camera rigs of all shapes and sizes. 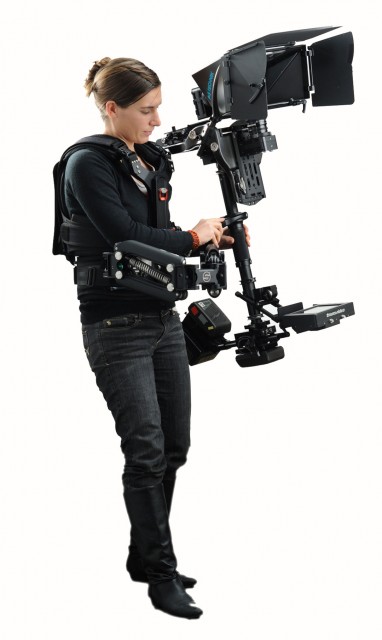 Here’s the Freestyle Rig from P+S Technik. You can use almost any two cameras from digital SLRs to RED Ones. If I were a punter, I’d go for the SI-2Ks. Dream on, Stefan. 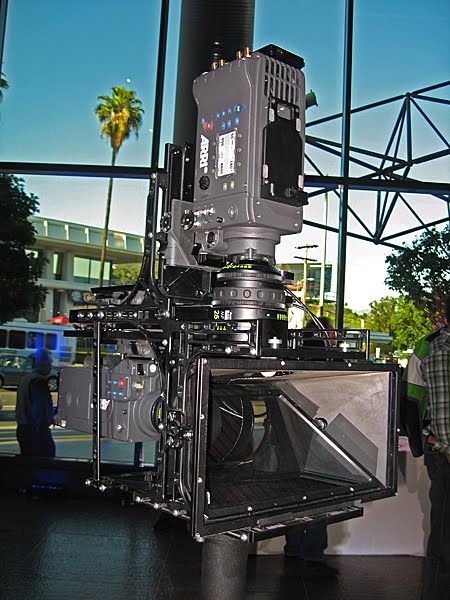 Stand after stand has 3-D rigs like this one using two Arri Alexas. I look for, but cannot find, Vince Pace’s Fusion system using two Sony HDC-1500 cameras. [It was hidden at the Fujinon booth! — Ed.] 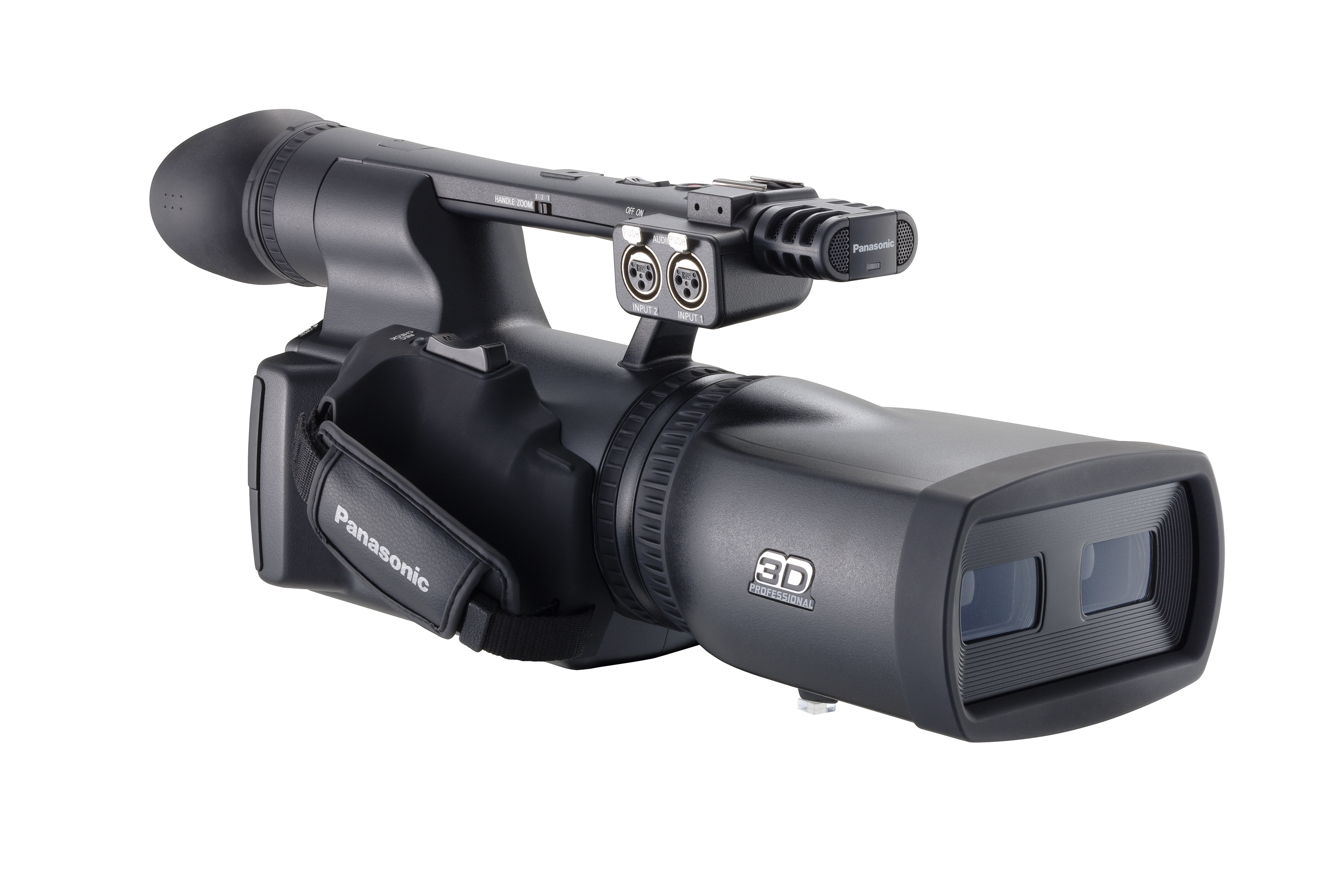 The 19 AG-3DA1 cameras on display at NAB are all work-in-progress prototypes. Panasonic line business manager Jan Crittenden readily admits it’s only 65% finished. In my interview I ask what’s the closest focus distance on the wide angle. She replies that the wide and telephoto specs. are still “still under discussion.”

The lens separation is fixed at 2.5″ – convergence (toeing in) is adjustable.

This is a frame from my Pinot documentary. Had I shot it in 3-D, the focus and convergence would be at about 4′. I like to get in close, probably too close and too wide for the AG-3DA1. While I was shooting, I heard running footsteps behind me and did a whip pan left to this view – same continuous shot.

Both focus and convergent in 3-D would need to change instantly from 4′ to infinity. Can this be done on the Panasonic? I don’t think so.

The next grape harvest is in September. Good timing, as that’s when the camera is planned to be released. How about it, Jan? Lend me a AG-3DA1 for my next harvest shoot.

See my 2-D interview with Panasonic’s Jan Crittenden here and learn why 3-D can be both good and bad. “Don’t do that!” says Jan.

This entry was posted in 2010. Bookmark the permalink.