You all remember my search for the elusive NAB OMG spot at the NAB Show? You can read my April 2010 Production Diary here. 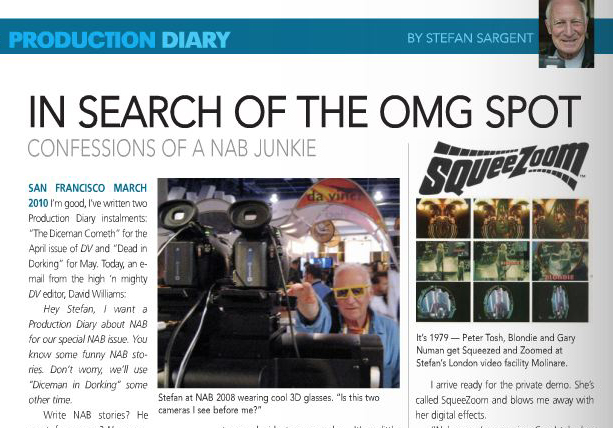 You did read it, didn’t you?

So there I am wandering around aimlessly, looking for free hand out or two, and zap – my 2010 OMG spot! The Penelope-∆! Only the pseudo-intellectual French could add the Greek symbol ∆ Delta. Get it? Delta for Digital and Greek mythology.

Before you read on – here’s my disclaimer: 16 CFR Part 255 Disclosure
Aäton never gave me a memory stick, took me to lunch, flew me to the Grand Canyon, took me to a Las Vegas show, lent me a camera or have promised to give me a camera. They’re real mean. Any of the above, especially the new Aäton ? camera would be gratefully accepted.

A BRIEF HISTORY – ÉCLAIR
Way back at the dawn of movies, around 1907, a French production company called Éclair was born. After a few years, they built a film laboratory and started building their own cameras. Lots of different cameras, each one better than the one before.

After the end of WWII, Éclair produced their first masterpiece, the Caméflex CM3 (Camerette in the U.S.). The market leader was the German Arriflex IIC. The IIC was a great camera. Kubrick bought one. Many years later I bought one. Was it Kubrick’s? I don’t think so. 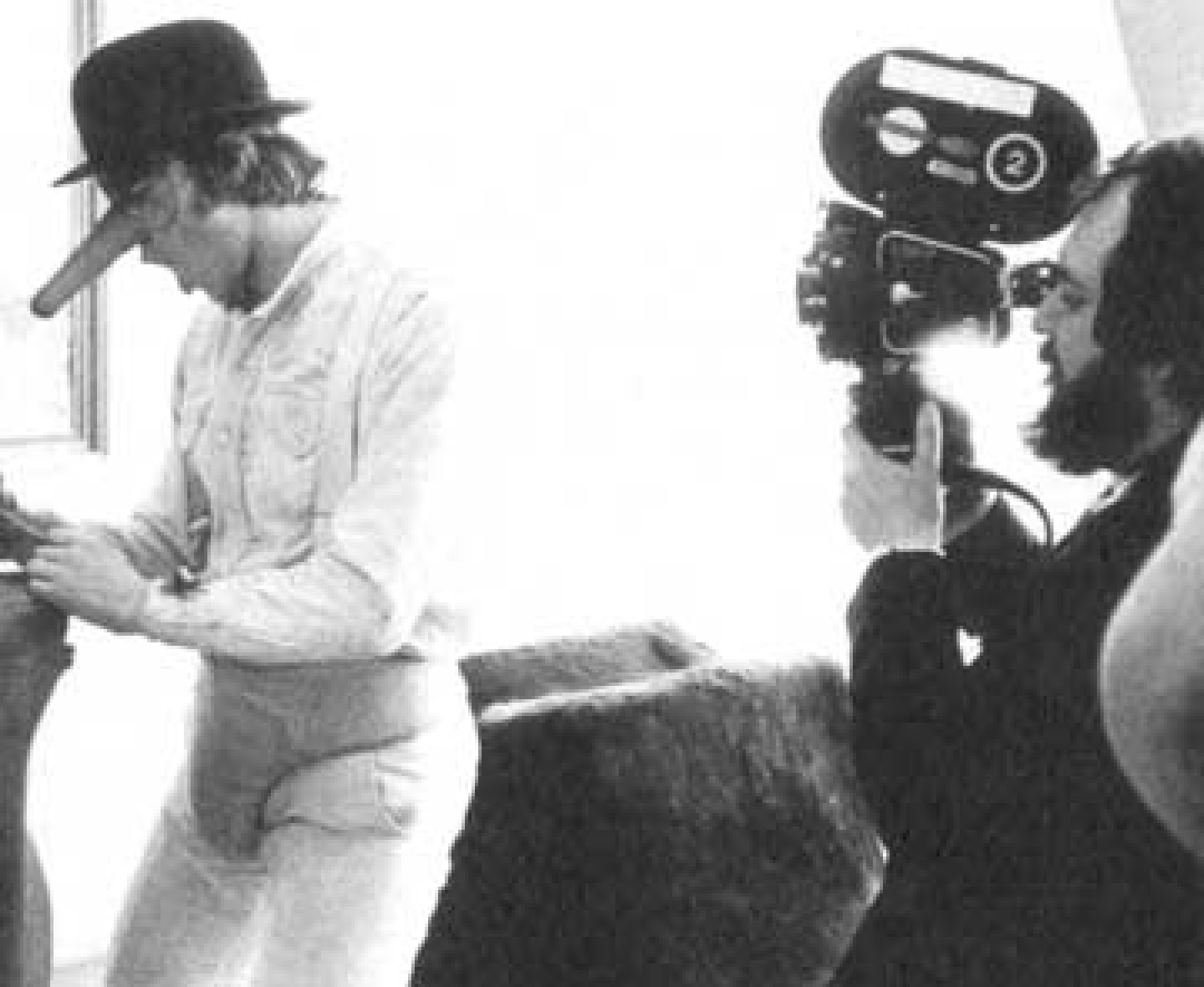 The big difference was the snap on and off magazine. With the Arri IIC when the film ran out you’d have to open up the camera and lace up the new film inside. If it was freezing, raining — or if you were on a moving boat or plane — this was nigh impossible. 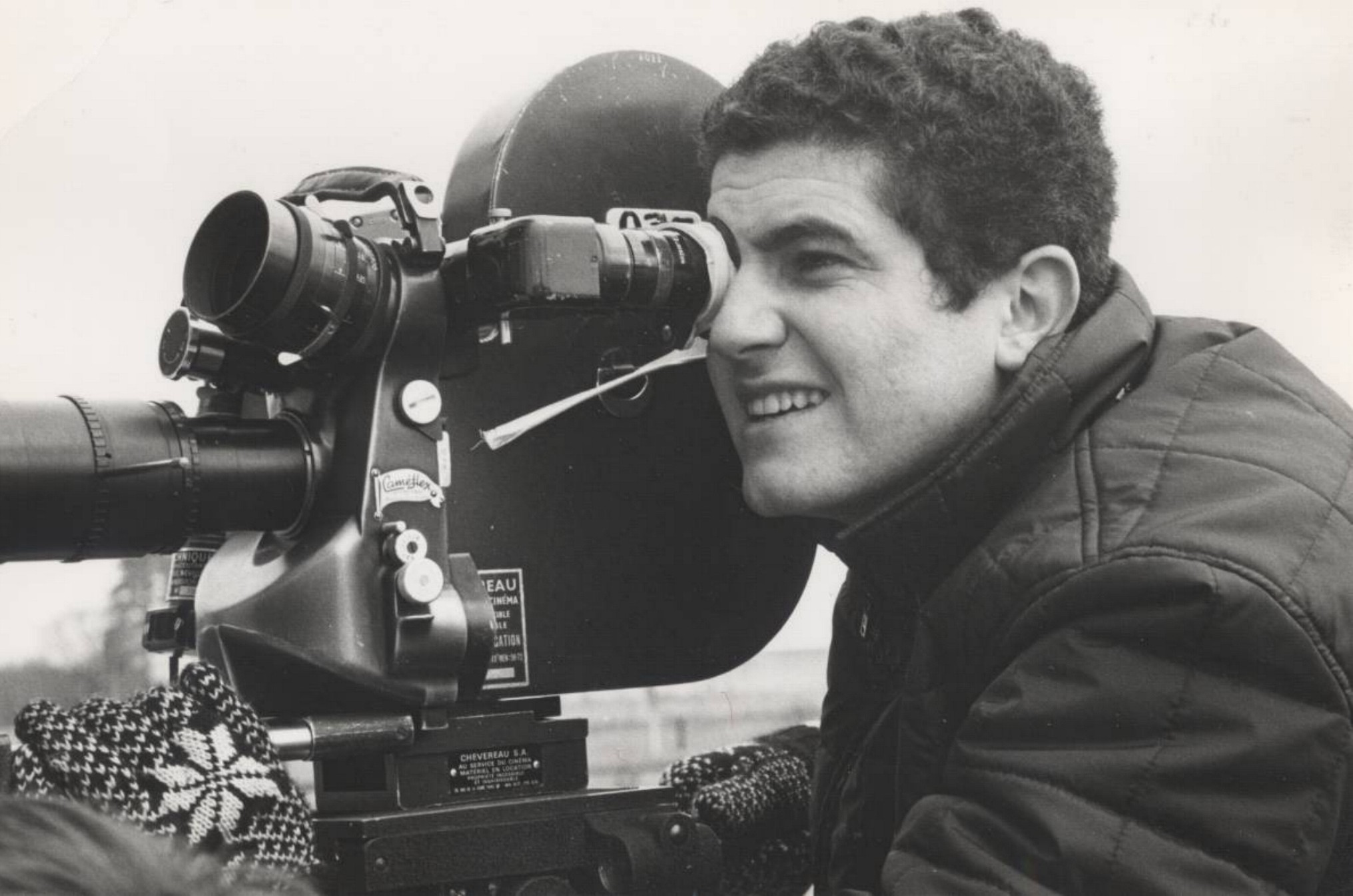 Claude Lelouch shooting A Man and a Woman (1966) with his Caméflex CM3.

With the CM3, it was just click – click. Two seconds flat. You could even leave the motor running! Another breakthrough was that the same CM3 camera could be either 16mm or 35mm.

Naturally the French loved it – Jean-Luc Godard’s classic Breathless was shot on a Caméflex. 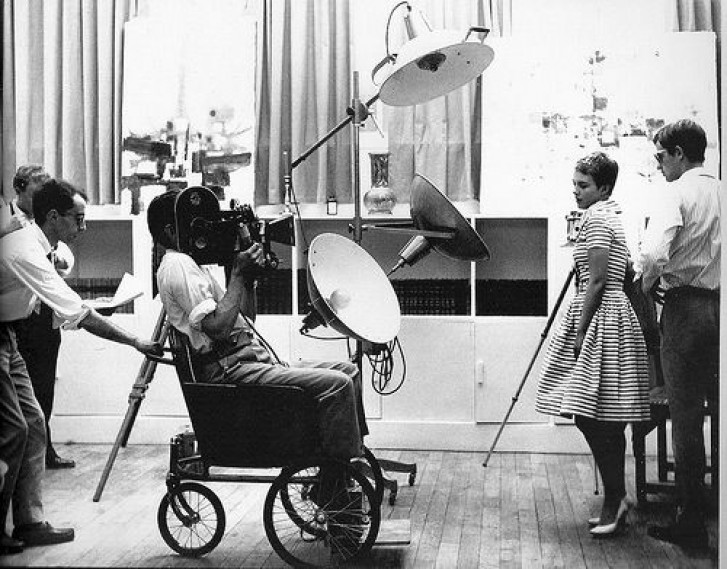 The Caméflex and Arri were noisy 35mm cameras. The Caméflex sounded like a coffee grinder with steel pellets. Most of the dialogue in Breathless needed to be re recorded.

I’ve shot with both cameras – “wouldn’t be great if there were a film camera that ran silently.”

In the TV world of 16mm, there was one: the Auricon. It was dead quiet and recorded sound on film. However there were drawbacks — the early Auricons weighed 36 lbs. Ouch! It was also top-heavy and ungainly:

At Sydney TV station, ATN7 I went out on news shoots with an Auricon. No fun. Back home I owned a 16mm Bolex. With my Bolex I would climb trees, ride canoes, lean of car windows and shoot. I could shoot high-speed, slo-mo and in reverse. Not so with the unwieldy Auricon. I hated it.

In 1963 Éclair came to my rescue with their sensational 16mm Éclair NPR, noiseless, portable, reflex. 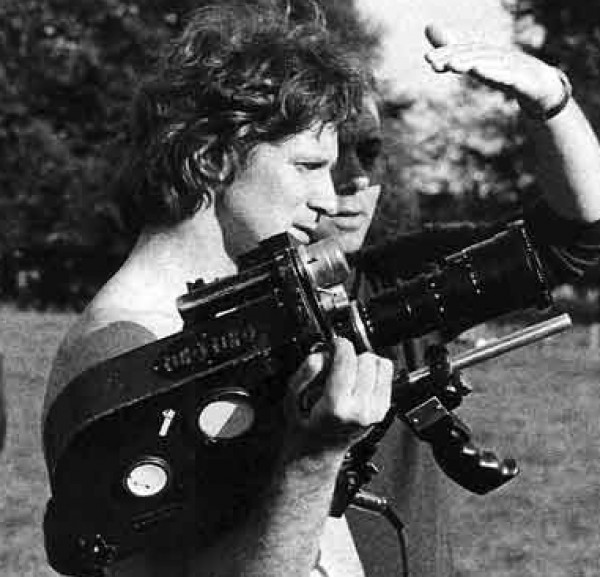 Stefan and his darling; an Éclair NPR – circa 1971

I bought the ultimate 1960s shooting kit: an Éclair NPR and a Nagra tape recorder. I was out shooting every day. I got so used to shooting shoulder-held that I often forgot to take a tripod. 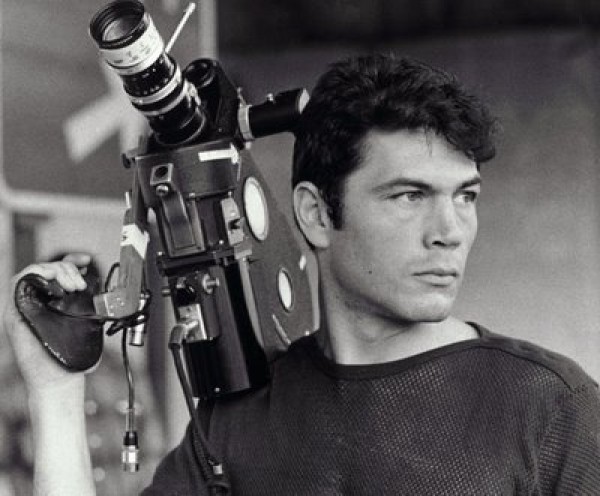 Meanwhile, Wexler largely shot the movie with a 35mm Caméflex: 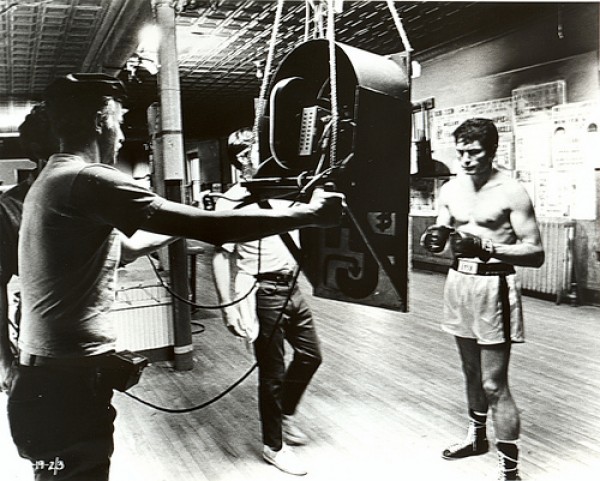 Wexler gets a POV boxing shot – the Caméflex is inside a padded box.

Wexler gets a POV boxing shot – the Caméflex is inside a padded box.

Éclair’s downfall came when James Bond producer Harry Saltzman bought the company to take advantage of English tax incentives. Production moved to London and the company went into a nosedive. R.I.P Éclair.
.
ENTER AATON
Skipping back a few years, in 1967, a young filmmaker named Jean-Pierre Beauviala, based at Grenoble University, was trying to make his own film. Unhappy with the Arriflex, he set to work on making improvements, concentrating on syncing sound to picture. Éclair saw his work and snapped him up. 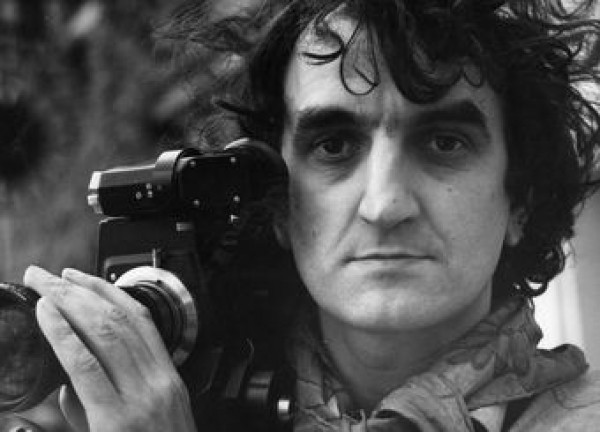 Eventually Jean-Pierre left Éclair, convinced other engineers and filmmakers to join him, moved back to Grenoble and founded Aäton. 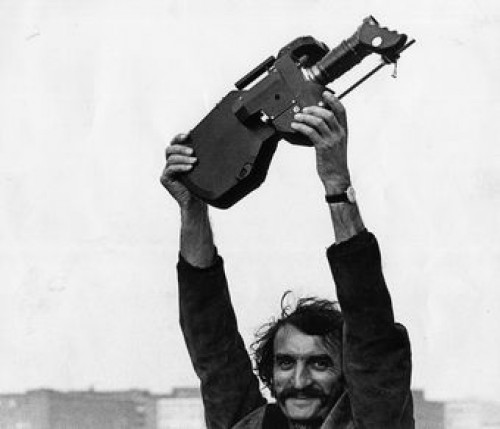 In ’73, he released the first 16mm Aäton, the 7A. It was like the Éclair only better and even more important, the company was run by enthusiasts, not by British businessmen.

American filmmakers Pennebaker, Leacock and the Maysles brothers, were all Aäton believers.

This year’s Oscar winning The Hurt Locker was shot by five Super 16 Aätons. 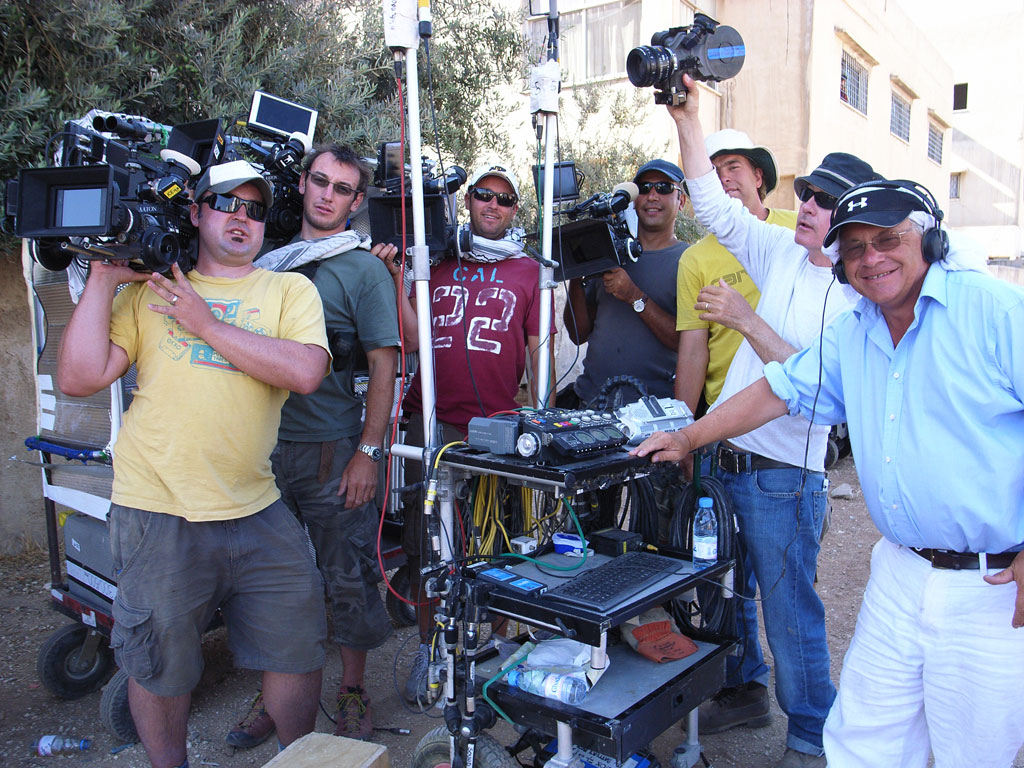 The camera crew of The Hurt Locker with their Aätons. DP Barry Ackroyd has the little A-Minima. 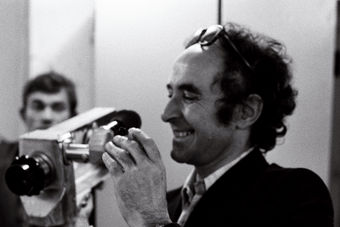 Jean-Luc Godard in 1979, pretending to like the camera that was designed for him.

His dream 35mm camera was a prototype and stayed that way. Godard’s concept was scrapped and, predictably, the two fell out.

One of her unique qualities is the ability to shoot either three perf. or two perf. Techniscope, the format that was used in the 1960s to shoot widescreen with huge film stock savings. 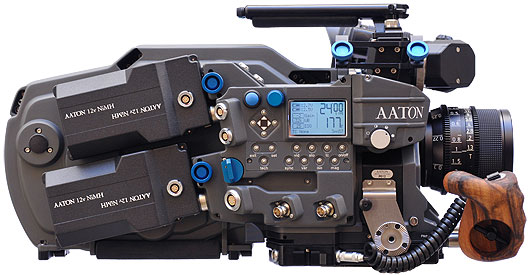 From the outset, the camera was planned to have both film and digital magazines, a true hybrid camera.

And OMG, here it is at NAB 2010, the Aäton digital camera, Penelope-∆. (Delta, remember?) It’s here working but not in finished form. The production model will be ready in June 2011.

Now I’m not sure why anyone would want to do that. But it’s a boon for the rental houses. Want a 35mm camera? We’ll rent you Aäton’s Penelope. Want an ultra high end 4K digital camera? No problem, we have the Penelope-∆ with its digital magazine. 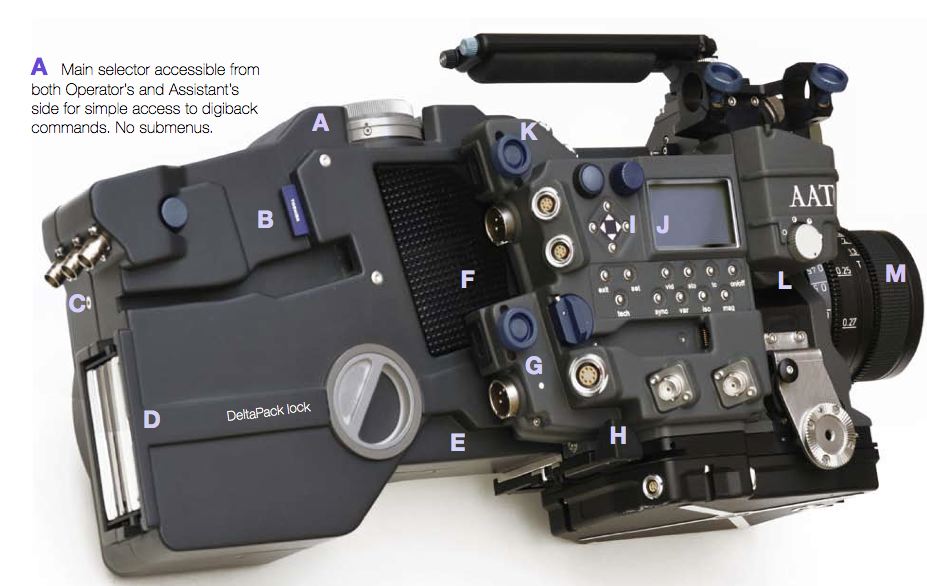 CAN A VIDEO CAMERA BE LIKE A FILM CAMERA?

In the past, video camera manufacturers have attempted to go the other way, to make video look like film. First was Ikegami’s EC-35 coming out in 1983. Was it really like a film camera? Nope. It was floptacular, the Edsel of all video cameras. 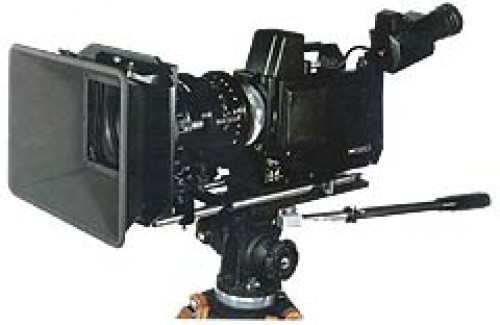 EC-35 (1983) …an electronic cinematography camera that rivals the film look of 35-mm cameras- without the cost of developing film. Now you can have video convenience but with film quality…

Sony introduced its CineAlta F-23 in 2006. The film-like results were much improved but the copywriters said the same old things: 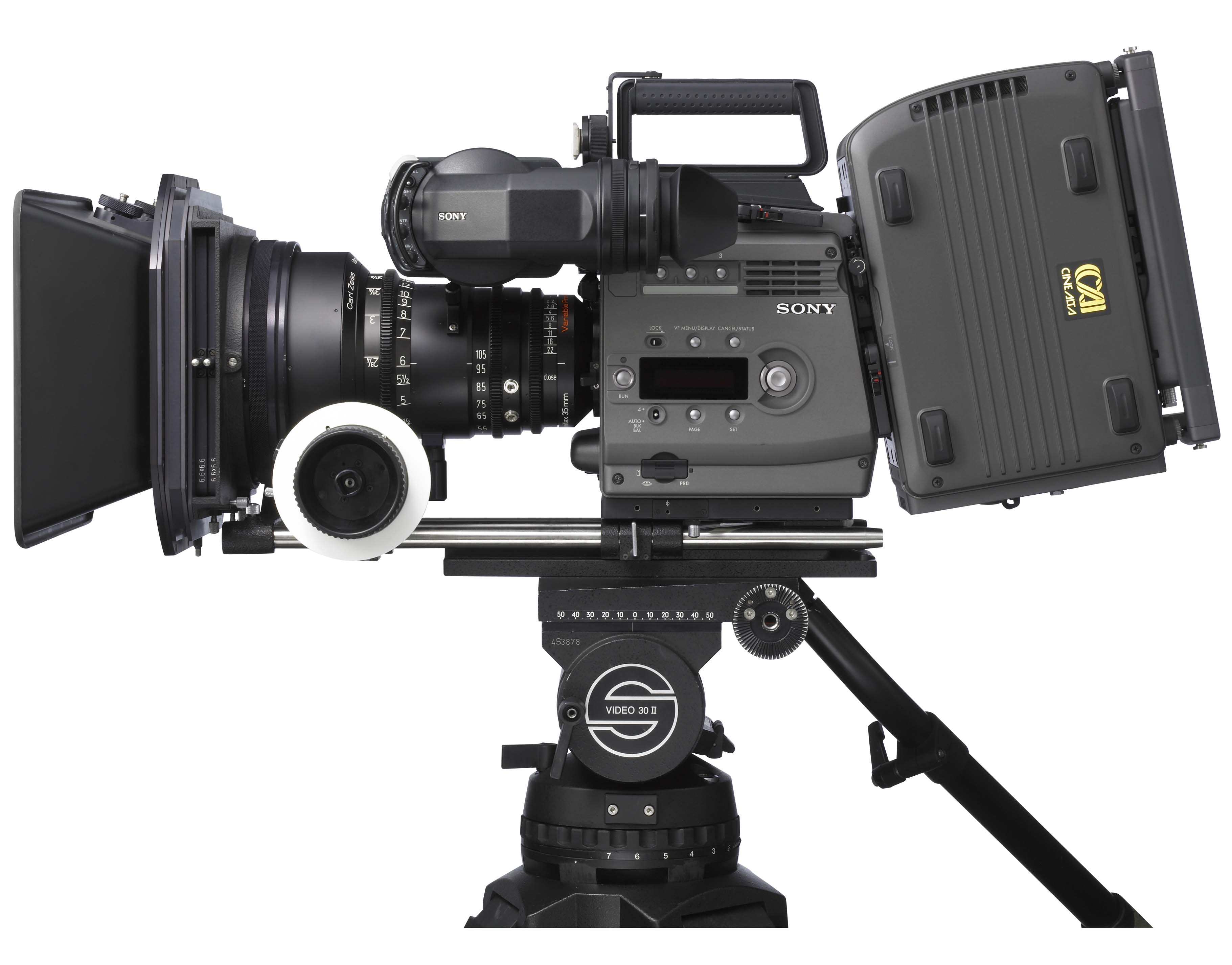 Sony introduced its CineAlta F-23 in 2006. The film-like results were much improved but the copywriters said the same old things:

CineAlta F-23 (2006) it offers a powerful combination: the advantage digital with the operating style of film…

While no one can doubt that the F-23 captures sensational pictures, it is still HD being good-old-fashioned 1920 x 1080 – way smaller than 4K, outdated by Arri’s Alexa and Aäton’s Penelope,  it is destined for the scrap heap – real soon now.

CAT ON A SHOULDER

Aäton’s core belief is that a camera should be like a cat on a shoulder. The Penelope-∆ follows that tradition.

The specs. for Penelope-∆ are awesome, a word I thought I’d never use. She will capture “beyond 4K” in uncompressed RAW DPX format to inexpensive 2.5″ SATA raid drives. For off-lining, a push in SDHC card simultaneously records DNxHD-36 for instant Avid editing. Too bad it’s not ProRes for the FCP editors. Maybe that’s coming as an option.

When I’m shooting, one thing that drives me nuts it going from bright exteriors to low light inside. The standard solution is to add stacks of neutral density filters and then take them off. Not so with Penelope-∆. Behind the lens is a custom CCD sensor from DALSA that can drop from 800 ASA to 100. Goodbye ND filters. 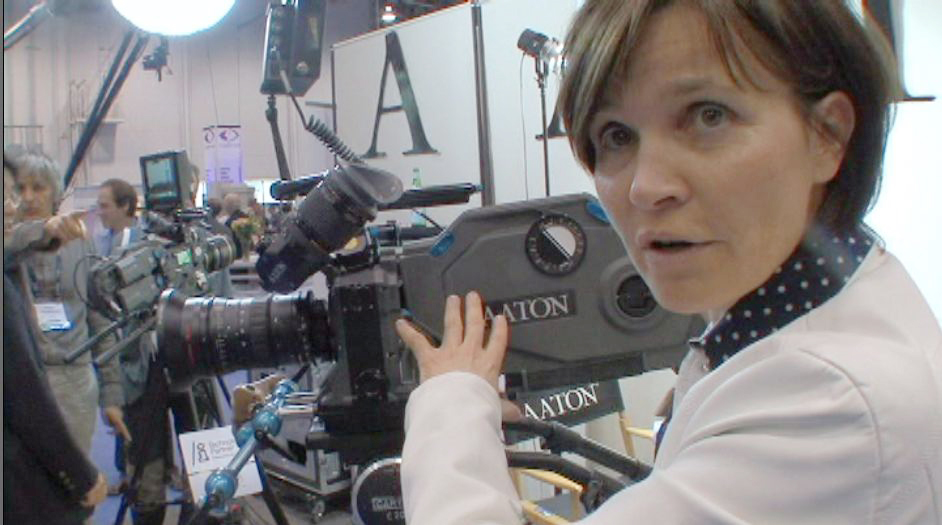 Watch Aäton’s Martine Bianco on YouTube. I asked her how much it would cost to buy the full film and digital kit for the Penelope-∆. “Ah, it would cost you a fortune!”

I love the French! OMG!

This entry was posted in 2010, NAB. Bookmark the permalink.