WHEN IT ALL GOES WRONG

IT’S ALL MY FAULT (EVEN THOUGH IT ISN’T)

I MAKE COMPUTERS CRASH JC: Hi Stefan, sorry I’ve been out of touch. My whole system went down after you left the other day.

SS: John, I’m sorry, it’s my fault. These things happen when I’m around.

SS: That’s what they all say. British Gas in the early ’70 installed a multi-million dollar IBM System 360 to do their accounts. They ask me to film it.

JC: So, what happens?

SS: It crashes. I wind up using stills.

Then there’s Evans and Sutherland in Salt Lake City. They had finally finished the Lufthansa flight simulator. 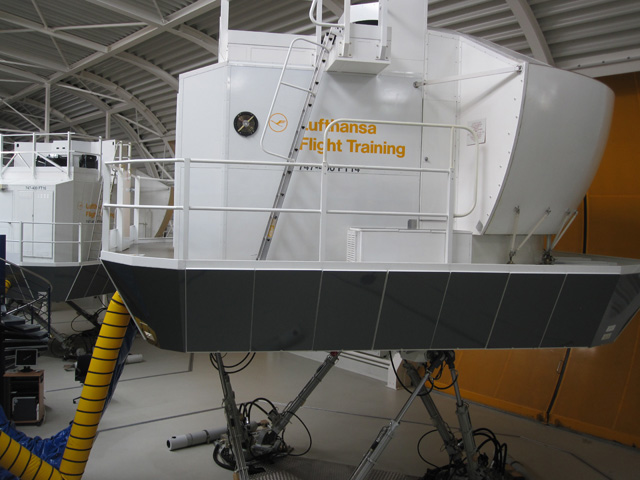 “All working… Come over quick before we ship it to Germany.” The day I arrive I see it working, really working. The next day, I get out my camera; enter the simulator and “poof” it crashes. I’m sent back in disgrace to the hotel to wait. After a few days, boss man, Bob Schumacker phones: “Go away, we having big problems. Go right away.” I spend the week on LA’s Zuma Beach. Finally, I’m told I can come back, “It’s all working”.

SS: Yep. It’s dead when I shoot it. Zilch. Nada. They hate me. “Not your fault” they say, but I know they are lying.

I RUIN AN ENTIRE TV ONE HOUR SPECIAL I’m making pop videos for the Aussie version of Bandstand. The New Zealand Tourist Bureau contacts Bandstand. Could they make a special in Auckland featuring Wayne What’s-his-name, their homegrown singing sensation? Bandstand counter offers with me. They will send me and an assistant to Auckland to shoot Wayne W-h-n on location. Bandstand lines up a free travel from the Flotta Lauro line.

JC: You hit an iceberg?

SS: No. We get there and guess what? No Wayne! His manager is there. The NZ Tourist people are there; but no W-h-n singing sensation. We wait and wait. Finally, I’m taken on a whirlwind tour of Auckland beauty spots. I shoot Kodak moments and get back to the ship in time to sail back to Sydney.

Day two at sea; it happens. Wayne is on board. “I’m really sorry. I got scared, stage fright.” “Where were you?” “I was hiding. Then as the boat was about to sail, I came on board.” I tried to rescue the situation by shooting him on board but…

I SINK BOATS SS: Here’s another one. I get a commission to shoot a new high speed boat, built specifically for the SBS, the Special Boat Service and designed for covert operations.

SS: No it’s great. David Green, its designer, has found some really tough commandos to be in the film. I shoot two boats in the River Exe estuary. 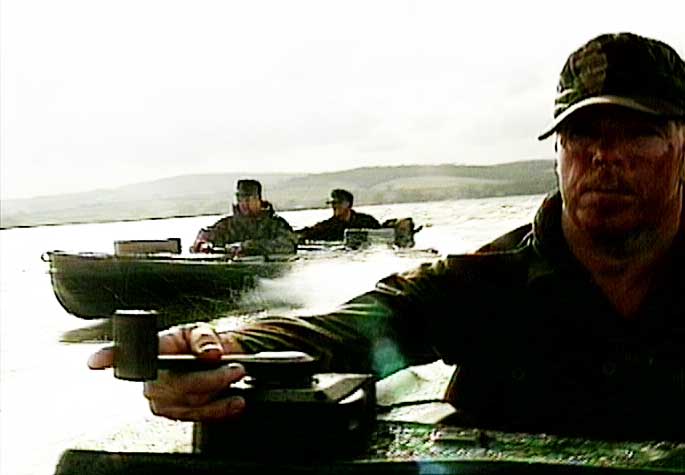 I’m sitting up high on the back of the boat with a 20 lb. rented Betacam on my shoulder, Tricia is hanging on to my waist in case I fall over. They’re speedboats – fast and super quiet for stealth operations. We’re going so fast, I’m terrified…

JC: You fall in the water?

SS: Worse. I sink the whole boat. Here’s the story: the boat is designed to sink underwater while the commandos swim off to attach limpet mines to shipping or whatever. When they return, they send a signal to the underwater boat and hey presto – it comes up out of the water.

I’m filming; the commandos sink the boat and swim off. Next shot, they swim back, send the magical signal, and lo… and lo… nothing. Not only is it underwater but I can see it sinking out of sight.

JC: Not your fault.

SS: John, I’ve heard that too many times. Poor David has to get a crane to lift the boat out of the water. I finish the film without the payoff shot. It’s in the narration but you never see it.

JC: Could you reverse the sinking shot?

This entry was posted in Production Diary. Bookmark the permalink.