OR HOW I GOT INTO (and out of) VIDEO

LONDON 1975 I get a phone call from my favorite conference client, Herb Kanzell.

“Stefan, got a little job for you. My new client, Redifon, makes flight simulators to train pilots. They need a film. I said you could do something for around £1,000. Give them a call.”

The great thing about Herb is that he only wants to do the conference. I am free to work with his clients directly. At the end of the day, Herb has a film to show instead of a cheesy, twin carousel presentation. It’s win/win.

I drive to visit Redifon just outside of Gatwick airport. These simulators are 5-10 million dollar babies. A £1,000 film? No way…

BUMP UP THE BUDGET I tell Paul Spence, my contact at Redifon, I’ll shoot as much as I can on film but I’ll need an outside broadcast truck to capture their closed circuit television visual system. Paul convinces his management that a more expensive film is needed and the money is found. My very first video production is part film, part video – a hybrid. 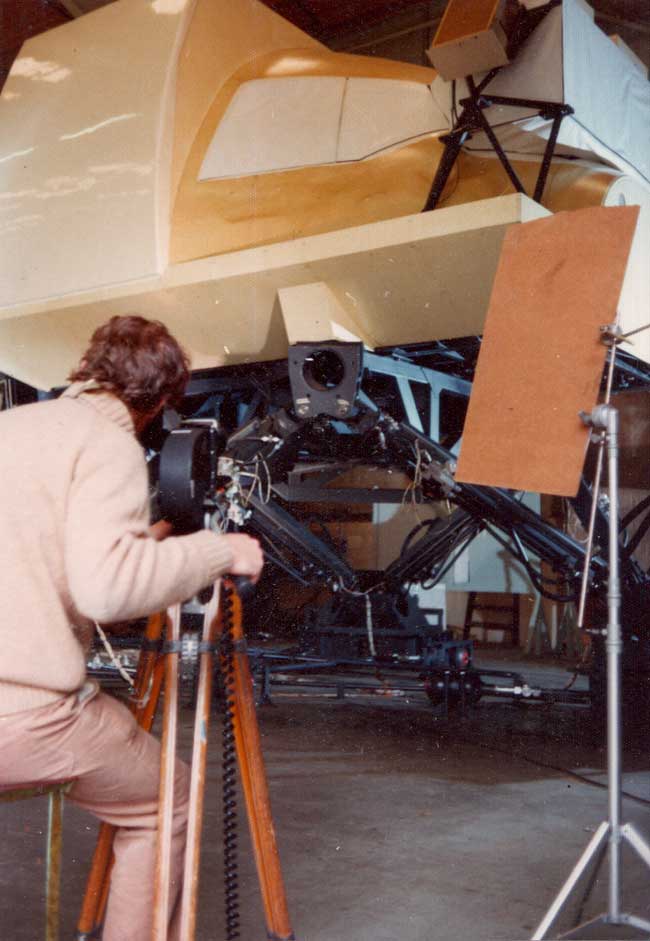 FLIGHT SIMULATOR 101 Forgetting all the computers, air conditioning and support systems, a simulator has three elements:

(1) The replica cockpit with all the working instruments

(2) a motion system giving six degrees of DOF, no, not depth of focus, degrees of freedom: heaving, swaying, surging, pitching, yawing and rolling.

(3) the view of the outside world. 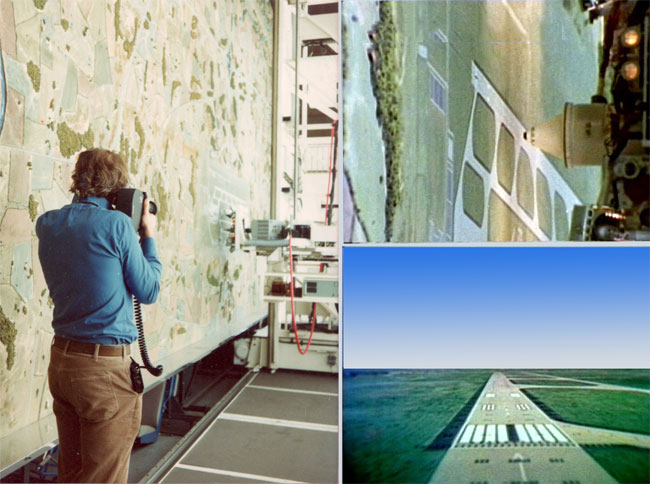 Imagine this – a huge model board of the surrounding countryside, an airport and of course, a runway – the scale is 2,000:1. If it were lying flat, you could run model trains around it. But here it is flipped on its side. It’s in a track so that it can move left and right. Looking at the board through a periscope lens is a $40,000 broadcast quality television camera, a Philips LDK33.  The camera can turn, move up and down the board and closer or move away. It’s a miracle of mechanical engineering. 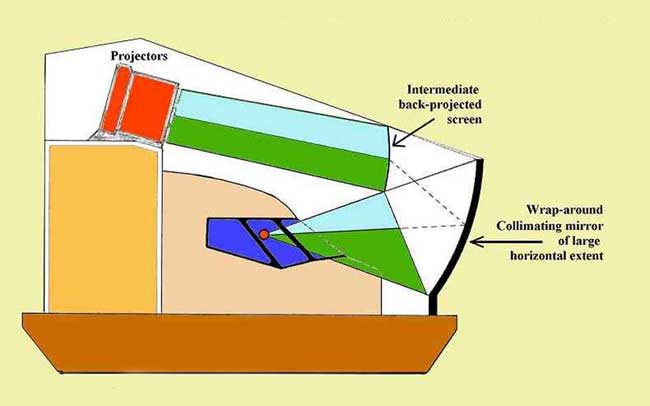 Inside the cockpit, the pilot flying the plane sees the landscape below and lands on the miniature runway. Projectors mounted on the cockpit project the television image onto a rear screen, which is in turn reflected by a collimating mirror.

It works well for the pilots but put a film or video camera in the cockpit and the outside view looks dark and blurry. I sit through a briefing being told, “It can’t be done, just record the camera output.”

I come up with the crazy concept of keying the projected scene into the cockpit windows. “I’ll paint them blue.” Horror. You’ve got to remember; this is 1975, over 35 years ago. Chromakey, what’s chromakey? Paul, just trust me.

TRILION I find a television facilities company, Trilion. They have an outside broadcast truck used for concerts and sporting events (and later that same year, to shoot Bohemian Rhapsody for Queen). And yes, they can bring along an Ultimatte chromakey “black” box. They will record both the camera signal and the composite key onto huge Ampex 2” quad recorders. 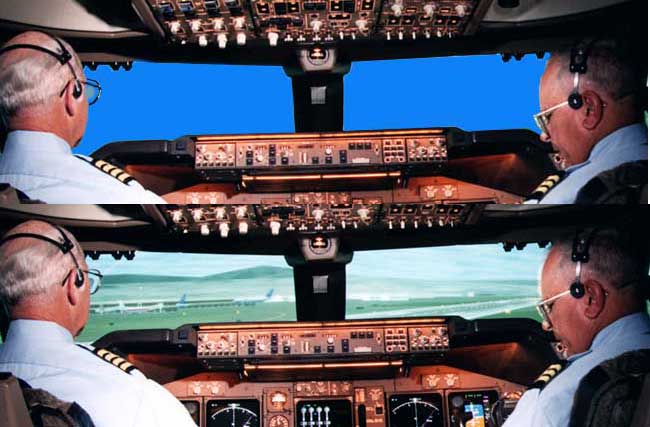 Redifon aren’t happy about my painting their simulator windows blue (I wonder why), so Tricia cuts up cardboard. We buy a gallon of Rosco Chromakey Blue paint, enough for 300 sq. ft. When she’s finished with the cards, she paints our kitchen, bathroom and furniture… chromakey blue. My that’s a purrty color.

On the big day, she tapes the blue cards onto the glass and I give the pilot a small TV monitor. It’s on his lap; so he has to look down to see the outside world. Poor man, I’m behind him shouting, “Look up, pretend to look through the windows.”

We do take-offs and landings and an AWACsi in-flight  re-fueling sequence.  The pilot has to fly under a refueling plane and maneuver the boom into the nose of his aircraft; the plane and boom are articulated models.  There’s audio intercom between our pilot and the technician flying the refueling model, “25 feet, stable, forward 10, slow down, forward 5, go down, stay right there, contact!” Hard to believe this isn’t the real thing.

Shoot over, I go to Trilion’s Soho offices to edit out the best takes and have them transferred to 16mm film. It’s a nightmare. There’s no computer editing, not even control track editing – well if there is, it doesn’t work. We’re not really editing, just dubbing good takes, tape to tape.

NOVOVIEW Redifon has bought into a Utah computer graphics company, Evans & Sutherland. I’m sent to Salt Lake City to shoot their revolutionary NOVOVIEW visual system. Dutch airline KLM has bought the first. No model board, no flying camera – it’s all in a computer memory. It’s now possible to create facsimile airports without building a physical model. La Guardia is the first. 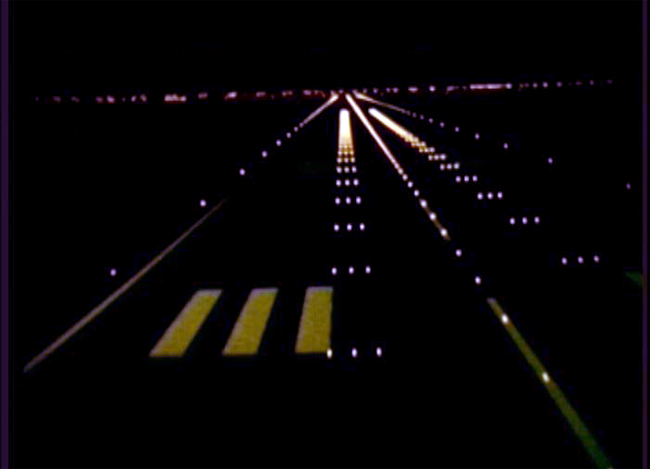 E&S is in abandoned military barracks within the university campus. Not the expected setting for a state-of-the-art computer graphics company – the company that would supply the graphic systems for the first Tron movie in 1982. Their simulation division is run by Rod Rougelot and Bob Schumacker. I spend three days with them. I’m told that an LA video company, Compact Video, has tried to shoot NOVOVIEW; a failure.

So what’s different? First – it isn’t raster scan television. It’s not even television. It’s a computer randomly firing off a stream of electrons to a beam penetration cathode ray tube. The tube has layers of colored phosphors. Fast electrons light up green, slower ones light up red, in between is orange and yellow. Don’t ask me how they create grey – but they do. The picture is nighttime only, with 6,000 pin-sharp light points.

MY SECRET SHOOT Fortunately I have modified my 16mm Éclair ACL camera to run at speeds from 4 to 50 frames a second. I make friends with a pilot and explain that I’m going to be shooting film at 4 frames a second – that’s means the plane has to fly six times slower to look normal when projected at 24 fps. A routine landing is going to take half an hour to shoot. I want a real landing with some movement on the wings and repositioning. It’s tricky to fly in slow motion. Harry, my pilot is great.

We spend all night doing take offs and landings. Harry promises never to tell my 4 fps secret. There was nothing on my exposure meter. I have no idea if it’s going to work.

I’m shooting reversal Ektachrome film, 7242 rated at125. At 4 fps I have three more exposure stops, effectively, 1,000 ASA. I fly to New York and get the film forced processed another stop = 2,000 ASA.  My worry is that I have over exposed. No, I’m in luck, it’s perfect. I fly back to Salt Lake City and show my film to rounds of applause. You’d think I’d just made Jaws.

REPEAT VISITS I forget how many times Paul sends me to Salt Lake City. E&S is now creating 3D landscapes using conventional raster television. The computer can feed different angles of the 3D view to different projectors – three projectors give a 180 degree wrap around view. 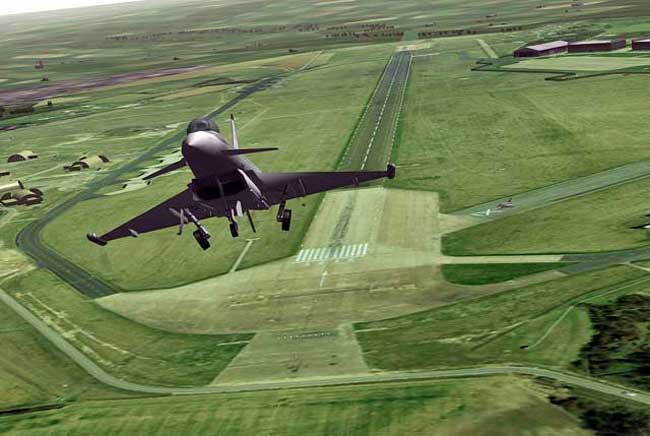 Sometimes, I go from SLC to LAX and spend a day at Compact Video. There I meet the founder, Bob Seidenglanz. Then off to Pacific Video for lunch with Randy Blim, who went onto develop  24p HD technology and win an Emmy. Finally I spend time with Fred and Linda Rheinstein at the Post Group. Bob, Randy and Fred inspire me, they’re my role models. I’m all pumped up and ready to get into video.

Compact Video in Burbank is my favorite. The clients are in a redwood paneled room, there’s a sliding door to the machine room. Big sofas, coffee table and huge chairs for the editor and director – plus a 24 hour kitchen. The editing is computer controlled; it looks great and it works. I want one!

In September 1976, I take a deep breath, and buy three Ampex VPR1 machines for Molinare, my audio studio. Our showreel is a rip-off of Compact Video’s, almost word for word.

Molinare has the first 1″ VTRs and the only CMX editing in London. In ’79 we take delivery of a four-channel  digital effects unit, SqueeZoom. 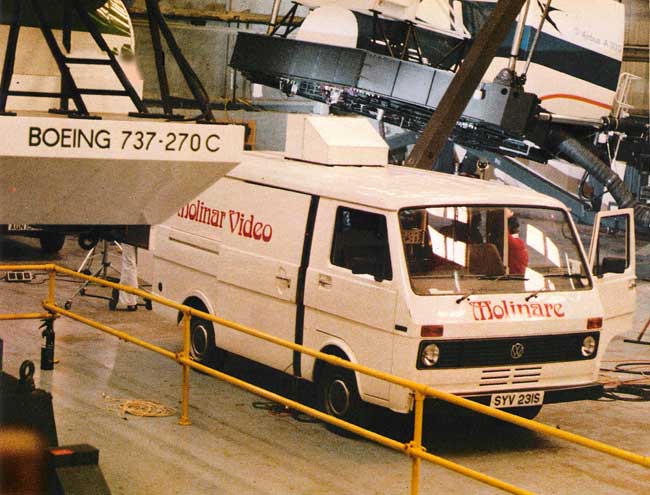 Now, it isn’t a Trilion truck shooting at Redifon, I am there with my own OB van, an Ikegami HL79 and an Ampex VPR2B. We call it, the MoliMobile.

The company grows and grows and in come investment bankers, non-exec. directors, management consultants and accountants, Arthur Andersen. The day I buy a $200,000 Ampex ADO – is the day they throw me out.

I’m at home again. No more 100+ employees, just the two of us. I have still have my own personal 16mm cameras. The phone rings. It’s my favorite conference client, Herb Kanzell.

WATCH MY FLIGHT SIMULATOR VIDEO All the early flight simulation shots in this E&S video are mine, both film and video. http://www.youtube.com/watch?v=qScxfDcF53w

This entry was posted in 2011, Full Length Articles, Production Diary. Bookmark the permalink.