DIARY OF A MADMAN Part 2: 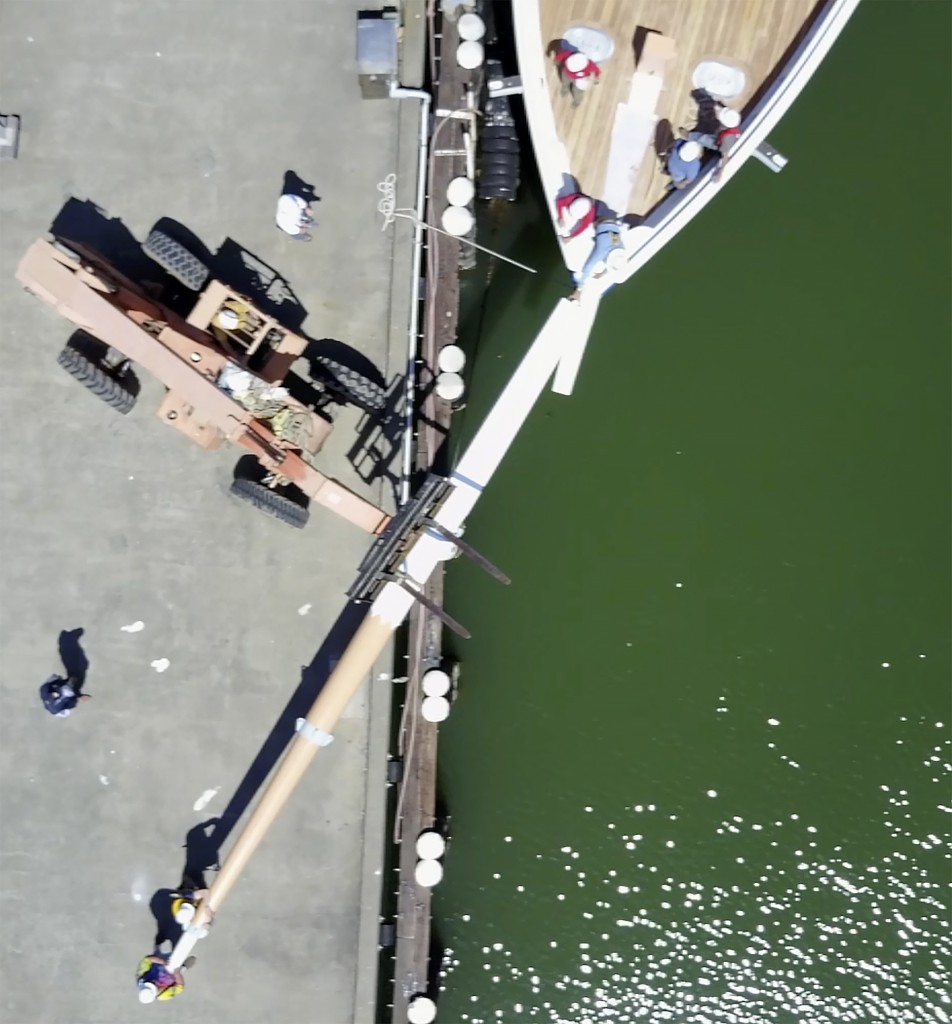 Here’s part two of my Matthew Turner story. Yes, I know it’s June, but aren’t you the lucky ones. Most of my Production Diary columns are old yarns from the last century; this diary is fresh and new.

The ship’s launch was on April 1. She is now comfortably moored at a nearby pier. Two giant, 100-foot masts, rigging and sails will be added soon.

In fact, the 35-foot bowsprit went on last week. We shot that bit of assembly with three 3D cameras and a tiny DJI Mavic drone, way up high. 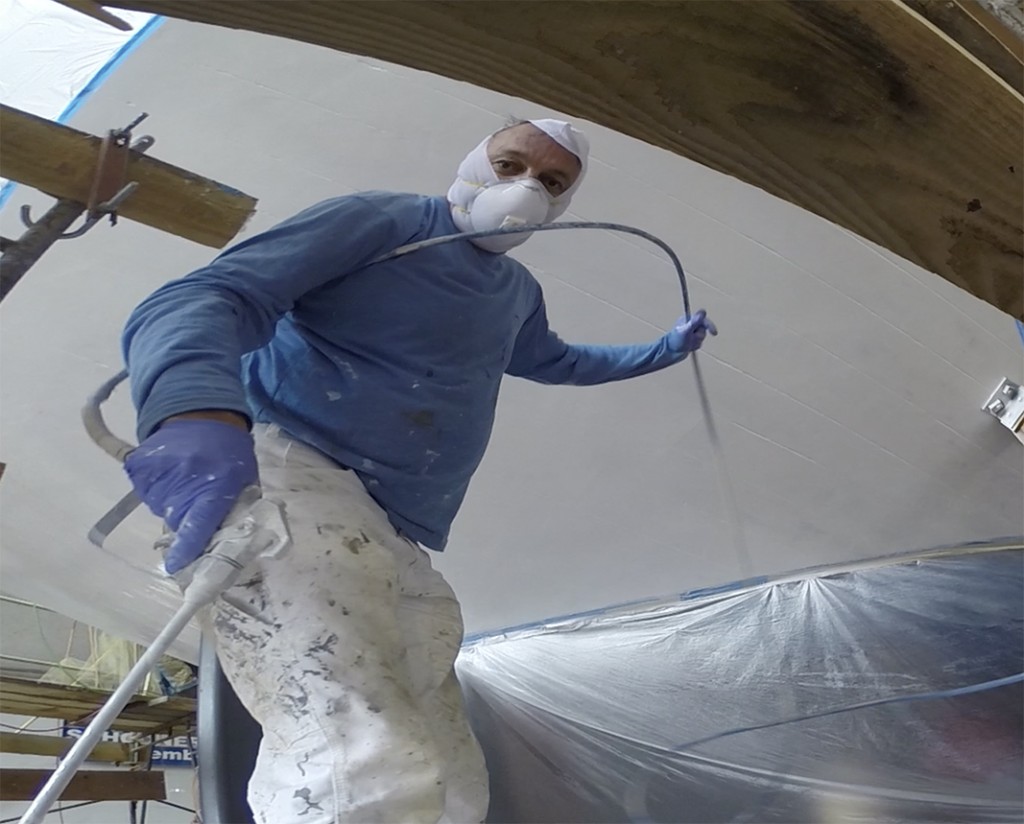 Time for the stairs again, but I’m going down this time. At ground level, they are spray painting. I grab my helmet cam and start the 3D GoPros running.

I call out, “John, do you mind putting this on just for five minutes?” I give him the helmet with the cams running. No questions asked—he simply puts it on and continues spraying. POVs like this are magic.

At 12, all work stops for lunch. I’m off too.
I gather up all my stuff: two Sony HXR-NX3D1s, the paint-covered helmet cam, the DJI Osmo cams and the unwanted extension rod, and another 3D GoPro on a clamp. That’s eight cameras and just me; my business card says filmwright.

I don’t want to be home too soon as the L.A. photographer, stylist and whole photo shoot enchilada are still there. Lunch at Corte Madera’s Boudin is good for me.

Back home, I was right. They are still there. My home, my castle, invaded by the media. I lock myself away and start transferring footage from today’s shoot.

My Documentaries Have Sequences
I work in sequences—they are like scenes in a play or movie, with a beginning, a middle and an end.

My constant fear is of little, disconnected three-second shots, like a newsreel. I want four- to five-minute sequences that flow together as one; you meet the people and understand what they are doing. All the shots should join up naturally.

When you’re shooting alone with one camera, it’s tough but not impossible. Multicam makes it easier.

Tricia is inside the ship shooting Jessie—I’m looking down on Franz struggling with the same plank. When Jessie hits the plank, you see it moving in Franz’s shot. Multicam gives the viewer a sense of real time.

When the propeller shaft was slid in from outside the ship, I wanted to see it coming into the engine room. Dan found me Peter, a volunteer. “Just keep the camera about 2 feet away from the shaft as it pokes through. Press this red button well before you think it’s going to happen.” And guess what, Peter gave me a great shot. He even moved sideways so you could see the hybrid engine. I’d rather pick up shipyard helpers like Peter than have a full-time assistant hanging around. (Tricia excepted.)

From Camera Card to Computer
I always transfer my stuff straight after the shoot. I want to see if I shot what I thought I did. If it’s no good, and it sometimes isn’t, I might have a chance to reshoot, or at least I’ll know what isn’t working.

I had a GoPro die last week. Tried everything: replaced the battery, new SD card. Nope, really dead. Bought a secondhand one on eBay. Tonight is garbage night. One dead GoPro is in the recycle bin.

House Photo Shoot
When I emerge from my den, the New York-based photographer, Alexandra, is finishing her photo shoot. She has a big, full-frame Canon linked by wire to a Mac laptop. Checks every shot. So very different from shooting documentaries. Tricia is putting out a crab meal on our deck. 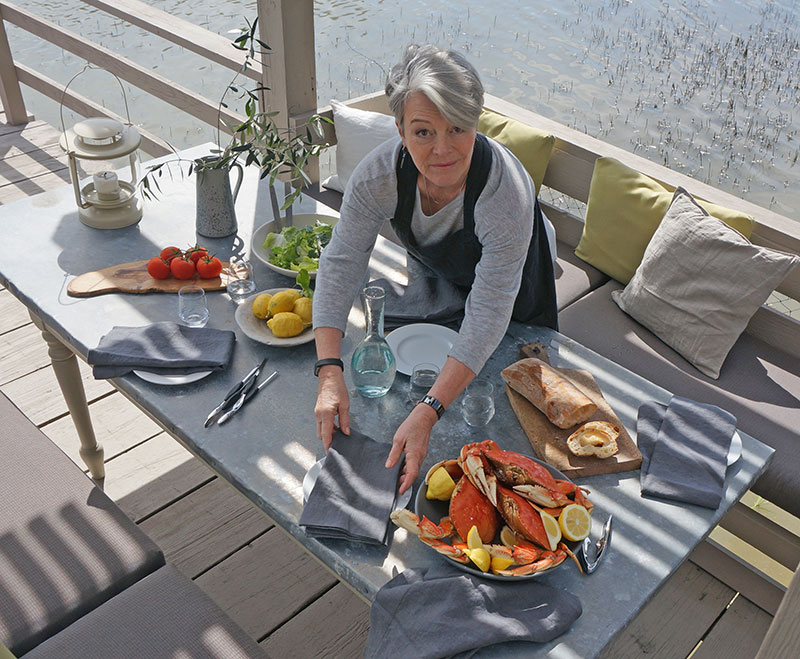 It’s for publicity, bought on a company credit card, a tax write-off. Traditionally when it’s all over, we eat the props. Crab and champagne, can’t complain. 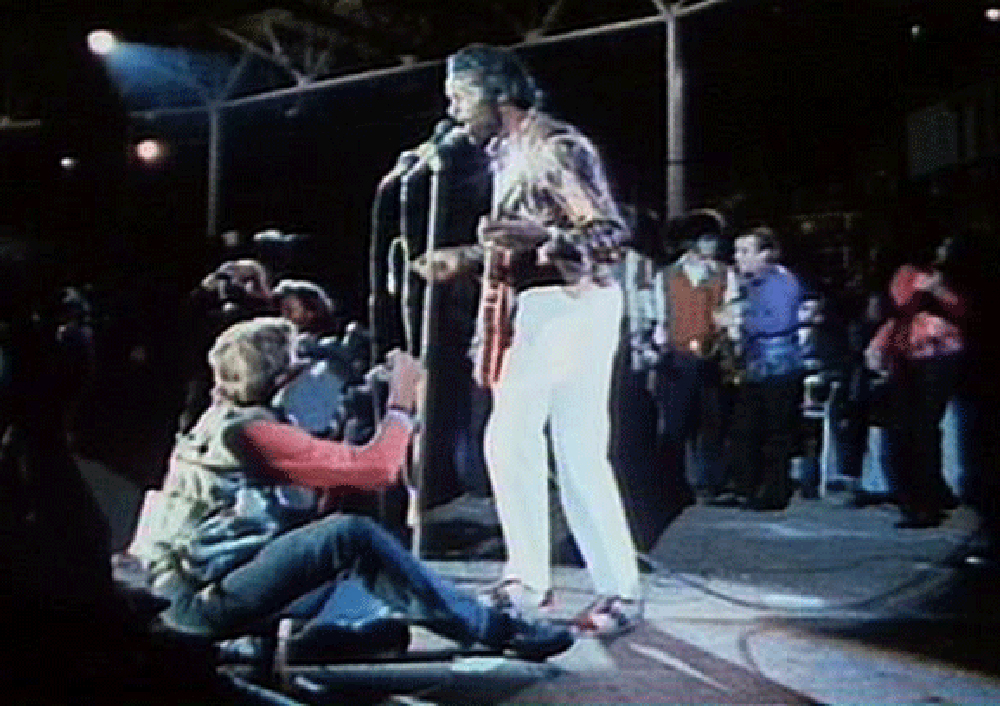 This is my diary and I must report that Chuck Berry died today. I guess you all knew that. He was 90. 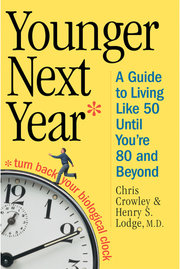 He didn’t make it by 22 years. Grossly unfair.

Chuck and Me in ’72
I was up there on the stage with Chuck with my Éclair ACL, shooting with re-canned BBC 16mm film stock.

March 20
April 1, splash day, is getting closer. When I arrive at the shipyard, I discover the rear tent wall has gone, ready for the ship to move out and into the water. The guys who were painting blue are now on the scaffolding lifting boards. No point in shooting scaffolding or a missing wall. Richard says that the decking has stopped again; another fruitless trip.

On the way out, I bump into Alan. “Anything I should shoot today?” “No, only scaffolding.” Then it hits me. “What about the ship’s wheel?” “Oh yes, Dan is up there now. I think he’s putting it on. Do you want a shot of it?” 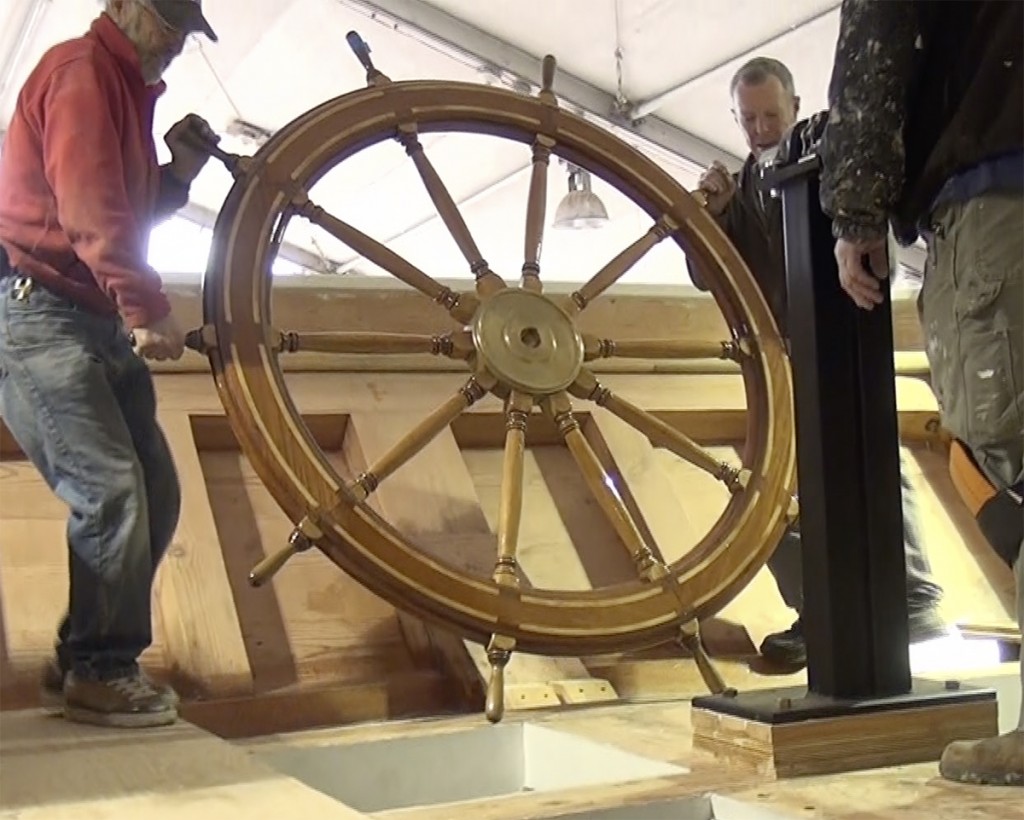 Do I ever! I get to the top deck in no time at all. Roy, Peter and Dan are moving the wheel into place. “Stop. Stop. Wait for me! Can you lean it down a bit? OK, action! Wheel up and on.” When the wheel is almost in position, I keep the camera running and race around for a complete reverse angle. “Hold it here. Great, now push it on.”

The wheel connects with the steering apparatus. “You know,” says Dan, “if I spin the wheel, the rudder will turn.”

I run down the stairs and shout, “Dan! Turn the rudder!” I confess, it’s not cinema vérité. Sometimes a filmmaker can’t be a fly on the wall.

I’m happy if I get one good shot. Today I got three. 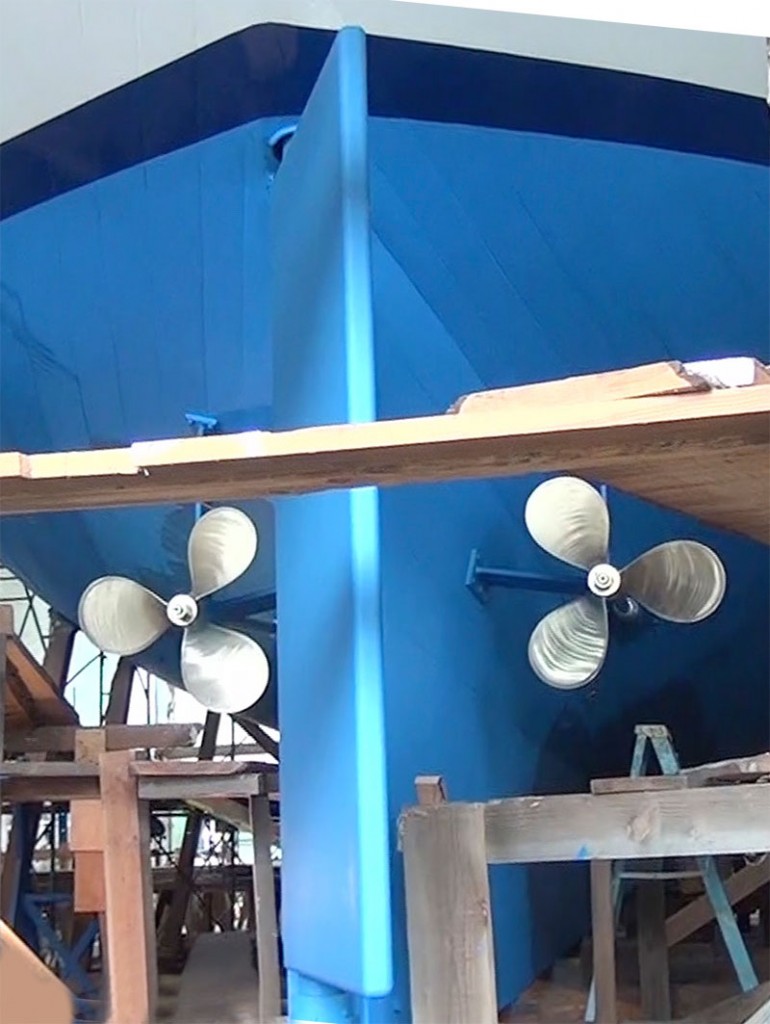 Standing Straight in a Leaning World
It’s March 27, the Monday of the ship launch week. I started this article assuming I was nuts and everyone else was normal and sane. Wrong? Yes. It is the other way around.

Take this morning: for two hours at the shipyard I watch a volunteer install a CCTV security camera at the very top of the shipyard (https://educationaltallship.org/Live-Feed.php). That’s great, but why install a new camera just four days before the ship is out of here? 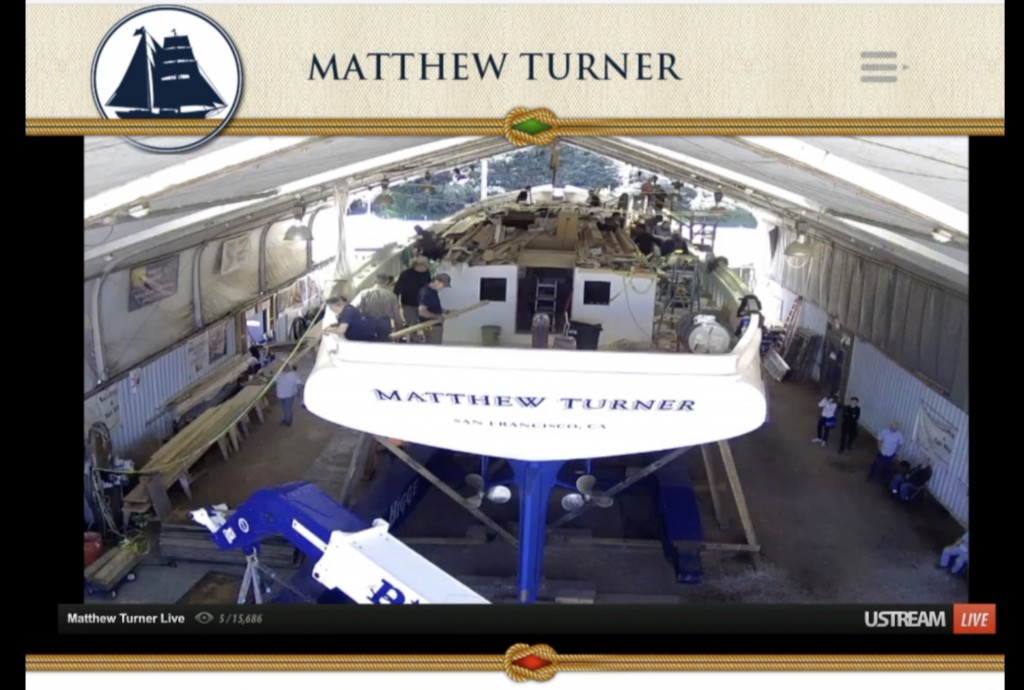 The live feed link is way, way down the educationaltallship.org home page, just where you’d never see it. But hey, tomorrow morning I can check this out and see if it’s worthwhile driving to the location. Nothing happening? I’ll stay in bed.

There’s Roy and Chris gluing down the decking. But where’s the ship’s wheel? It’s gone. Dan, what have you done with it?

I hang around to meet the Bigge people (pronounced Big E). This is the team who will move the ship from the tent to the launching slip. I worked for BP in Alaska on the North Slope with huge Texan oil riggers. These Bigge guys are tougher, stronger and have names like Rocky and Mad Mel.

On Friday, Bigge will drag the ship out of its cozy tent and into bright daylight.

“Diary of a Madman” will continue next month.

What a Difference Three Years Makes 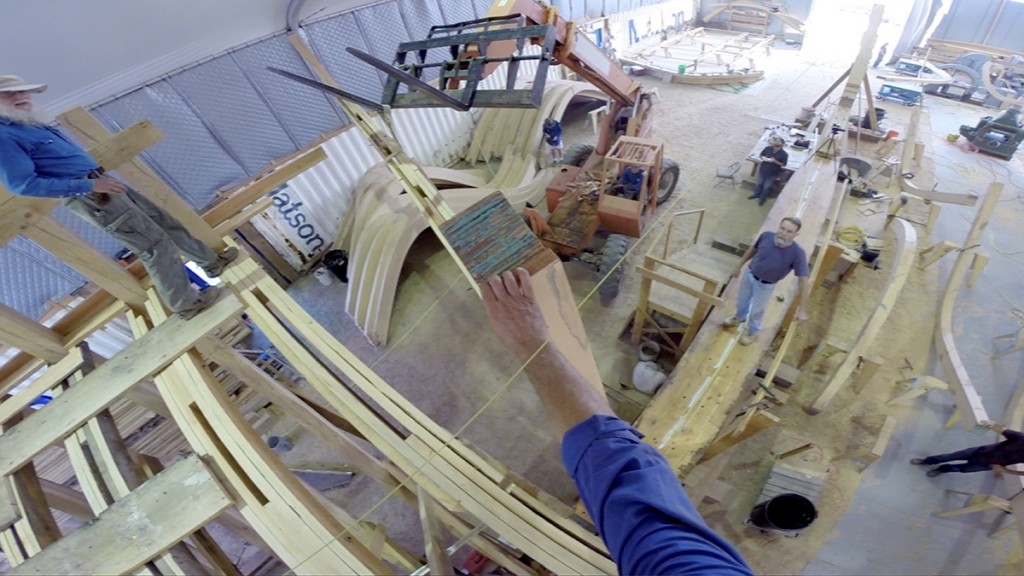 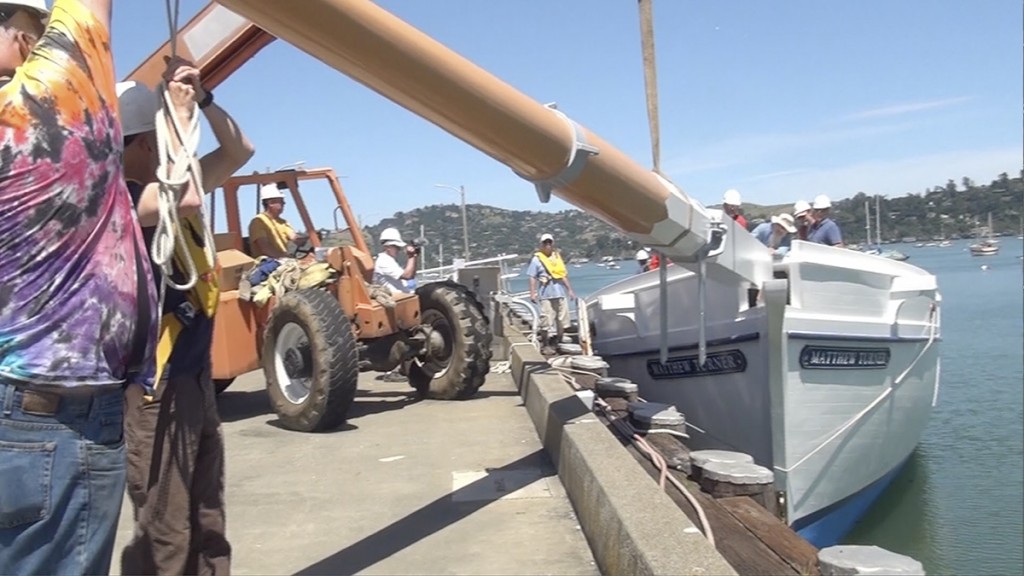