DIARY OF A MADMAN Part 3

Tra La, My Ship Is Being Launched

Two days before the launch and the Bigge crew has taken over. All the volunteers are told to get off the ship and keep well away while the Bigge boys move in metal plates and 48 huge rubber wheels.6/23/2017 3:30 PM Eastern

DOIN’ AN OTIS
In the middle of this story, you’ll read about how Franz climbed a ladder and clamped my underwater GoPro to the top of the ship’s rudder, ready for the big moment when the ship was launched.

What a great shot that would have been, if only someone had turned the GoPro on. Yes, it was “on” but not running—that’s the other button, the one on the top. Well, on the bottom, as the camera was upside down. Disaster. I got nothing. 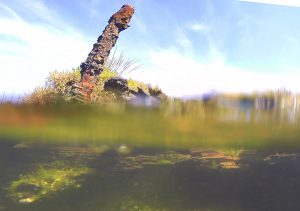 I am so pissed off that that I’m determined to shoot something underwater. “Where’s the wreck of the Galilee? I’ll shoot that!”The Galilee, an 1891 brigantine, is the ship that today’s Matthew Turner is modeled on. It’s sunk in the Sausalito mud in nearby Galilee Harbor.

Diver Dave volunteers to shoot it.

I make sure that this time the red lights are flashing. He dives, I watch, “Sittin’ on the Dock of the Bay,” while the local Galilee harbormaster berates me.

“You have no right … private property … filming permit …”

“Please don’t spoil the moment, the camera is way over there, out of sight, underwater—and I’m sittin’ here doin’ an Otis.”

MARCH 30 SPECTATOR SPORT
Two days before the launch and the Bigge crew has taken over. All the volunteers are told to get off the ship and keep well away while the Bigge boys move in metal plates and 48 huge rubber wheels.

MOVING DAY
This is the moment of truth. The ship will leave the tent on wheels. I have a GoPro attached to the rudder. The Bigge crew has been putting down flat metal plates to smooth out the bumpy soil outside the tent. I take a seat on the ground. We wait and wait. Hours pass. How long will the rudder’s GoPro run?

Brandon, my drone guy, is here. So are Peter and Mike, with their DJI Inspire 2s. They promise to share their footage with me. It’s such a long wait for the ship to move that they take turns going up and flying around. Peter has brought a small tent and drinks for all. All three drone crews bond and share stories. “Have you seen the new Mavic?”

My son-in-law George has one of my Sony HXR-NX3D1 cameras. He has found another veteran TV cameraman and is swapping war stories. “The CP-16 was a much better camera than the Auricon.”

Hours pass. Nothing. The police and the Bigge crew look worried.

“It’s coming out in five minutes,” the police tell us. Oh yeah. Another hour passes. My rudder-mounted GoPro has been running for three hours. Poor thing, it hasn’t got a chance to make it to the launch ramp before the battery dies.

Finally, with a cheer from the crowd, the ship moves slowly into the sunlight.

Drones take off. I’m shooting with my Sony NX3D1 in one hand and a GoPro 3D rig in the other. George is somewhere that he’s not meant to be—up a tree, maybe. Brandon has battery problems and lands his 3D drone after only one pass. Bad news, but I still have access to two hours of 2D aerial footage from Peter and Mike.

The day ends with the ship parked at the entrance to the launching ramp.

I go home and spend the night transferring rushes and recharging batteries.

APRIL 1, LAUNCH DAY
They say it will happen at 4 p.m., when the incoming tide lifts the boat and floats it away. I spend the morning at home, transferring shots from five cameras.

Franz, the shipwright, phones me. “Get your ass over here and put the camera up on the rudder.” I drop everything and drive to the ship’s launch ramp. Franz has a ladder and mounts the waterproof GoPro. “How do I start it?” “Franz, it’s 12:15 now, the launch isn’t till 4. The battery will die before then.” “OK, be back by 2 p.m. latest.” I go home for lunch and to pack all the other cameras and tripods into the car.

I’m back at 2:07, but the Bigge crew didn’t wait for me. The ship is halfway down the ramp in the water. Whaaa! “Don’t worry, Stefan. The guy doing the CCTV feed turned your GoPro on.” “Were the red lights flashing?” “I think so…” Think so is not reassuring. Too late for a ladder in the water. I spend the next two hours waiting for the tide to rise and launch the ship. My GoPro slowly goes underwater. In my mind, I can see the shot. It’s brilliant.

WIN SOME, LOSE SOME
I’m standing next to a five-year volunteer, Jitendra, taking a selfie. In one hand I have my 3D GoPro and in the other my regular Sony camera. Next to me is a priest, there to bless the ship. Rather than put my Sony on the ground, I turn, “Do you minding holding my camera?” “Of course not.”“Since you have it, can you take some shots?” “Show me how, but I’m hopeless with cameras.” I give him my 15-second crash course: “Just press this red button…” and he wanders off.

I take some more GoPro shots and then watch Brandon as he flies our 3D drone over the ship being towed to a nearby dock. After a while I remember that the priest has my precious camera. I walk through the crowd. “Anyone seen a priest with a camera? Anyone seen a priest with a camera?” “He’s way down there, near the fence.” I fight my way through scores of visitors. We meet up. “Oh, there you are. I really got some good shoots.” “Great, thanks.” Of course, I didn’t believe him; they will be wobbly, into the sun and probably out of focus.

The ship is safely moored at the pier. Now to get my underwater GoPro back. I call out to the photo boat with son-in-law George. Nope, they aren’t allowed to get close enough. At last, a guy in a kayak unclamps the camera and puts it in a bucket to be pulled up.

Our car has broken down. I get home late. There is a ton of footage to transfer. I’m dead tired. I’ll wait until tomorrow to see my underwater footage. I dream about the shot. Glug, glug, we go underwater.

Dawn. I can’t wait to look at the GoPro file. Quelle horreur! It is empty! Nothing!

The CCTV guy had put the camera on standby but had not pressed the top record button. I am distraught.

OMG! (Dare I say “OMG?”) It’s the priest’s shots—and they are so much better than mine. I wipe a tear from my eye. Thank you, Lord. Who needs a silly underwater shot of a ship’s hull when you can have genuine emotion from real people?