LIFE ON THE BLEEDING EDGE May ’08

SPITFIRE TELEVISION, LONDON, NOVEMBER 1990. I’m at work early. Anna is waiting for me. She’s our graphic designer doing “The Wide Away Club” opening titles for a local television station.

me in our chromakey studio - Anna designed the background

I look at her opening titles. There’re fine.

“Stop telling me that! I know you hate it!”

“Erica, get a taxi for Anna and send her home.”

RENEE IN TEARS. We have the very first Avid/1 Media Composer in the UK. No one else has one. My colleagues think I’m crazy.  Maybe they’re right. We are living on the bleeding edge of technology. 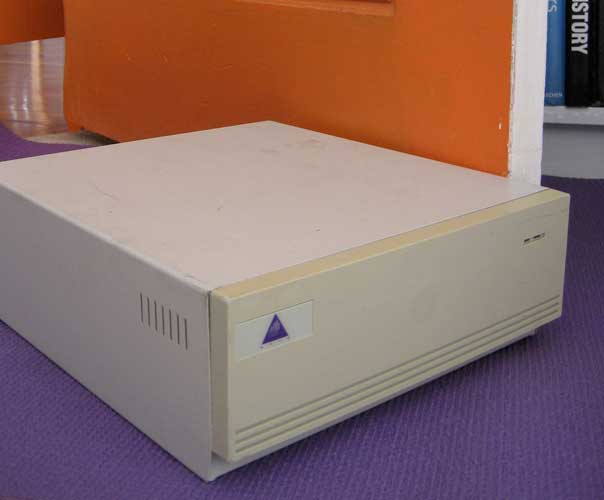 Renée has been cutting for two weeks now.  Every night I drive her home in tears. The strain is getting to her but we are almost there.

Renée has lost confidence. Both Avid/1 and Spinalot, its $9,000, 9 GB drive, are temperamental. Every day, I phone Avid in Tewkesbury. Spinalot is tired. He’s dancing the frug. I smell trouble.

Rob, my client, is coming to see the Avid offline late this afternoon.

Renee: “I think it will run better if I consolidate.” “Sounds good. Do it.”

NICKI IN TEARS. There is screaming in the reception area. Erica and Nicki are shouting at each other. “I want you both in my office upstairs now”.  The girls arrive still shouting.

“Did you hear that? Nicki called me a bitch.”

Tricia, wife and business partner, looks up and says in the voice of sweet reason, “Well Erica, you are a bitch.”

CONSOLIDATE AND DIE. I get back to the Avid edit. Renée is distraught.

“I consolidated. Now there’s nothing”.

All the shots are there but in totally random order. The sound track too has been mangled. The voice says half a line about toothbrushes, we see sunglasses; a snip about bottle teats, we see an actor playing William Addis, the inventor of the toothbrush.

I phone Tewkesbury. I’m hysterical. They try to calm me down.

“What version software are you using? … You tried to consolidate? … You used the optical media drive? … Didn’t anyone warn you?”

THE CLIENTS ARRIVE. “Rob, Jim (his client), we have a problem – like there’s nothing to show you. We sort of made an experimental film by mistake. Just trust me. Have dinner, come back and we’ll have it sorted out.”

I find Robin, our best editor. “The Avid is a disaster. We’ve got to on-line the Addis job now. There’s no EDL, no nothing.”

“Renée can you remember the edit?”

“Open on the studio shot of old man Addis, tape three.” “Got it. What comes next?” “First line of VO, second take.” “We need the Select Effects star bed on one inch … ”

A few hours later, Rob and client come back. I have champagne ready. Dim the lights. Roll tape.  “Addis – an ongoing story of innovation in product design!”

Lights up. Client overjoyed. “Perfect.” The cork pops. We all thank Robin and Renée. More tears.

Just another day on the bleeding edge.