WILL THE REAL BUS DRIVER PLEASE STAND UP Jan ’09

SAN FRANCISCO, CALIFORNIA, 2008. We’ve spent a year filming Jamie Kutch. He was a Wall Street trader, threw it in and now makes Pinot Noir in Sonoma County. Yep, he’s a real person not just an actor.

The grapes (the “fruit”) have just come back from his first harvest. Jamie and his girlfriend, Kirsten (she’s a real person too) are working the conveyor belt, removing leaves, sticks and sickly looking grapes. On the conveyor belt, nestled among the grapes, is a little box. Kirsten picks it up and opens it. Jamie goes down on one knee. 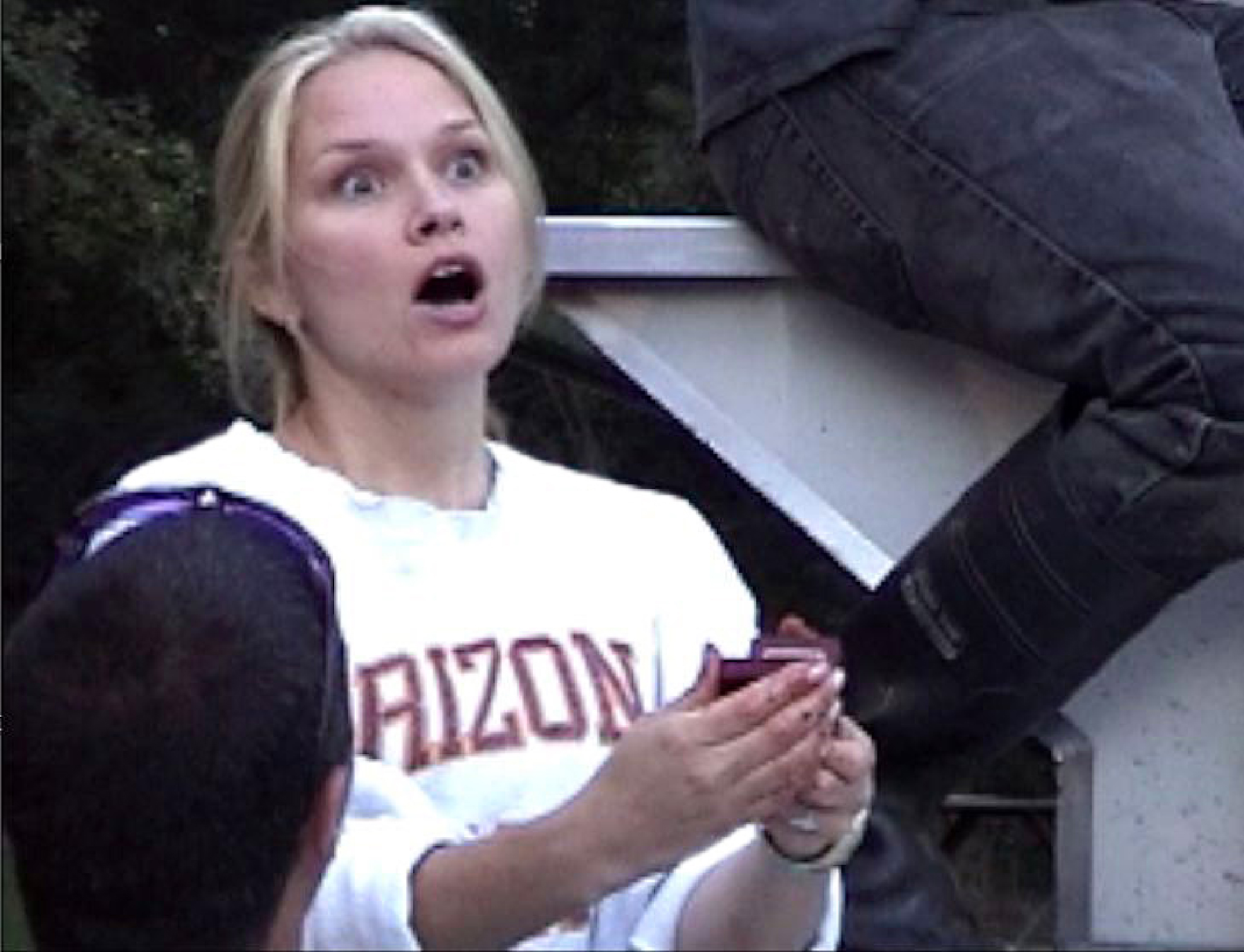 Kristen finds a ring on the conveyor belt

I get an email from Brian Silverstein of Manhattan Production Music in NYC “was that real or were they just acting?”

VICTORIA, AUSTRALIA, 1967. I am making Australian Ugliness, a 60 minute TV doco.; how the beautiful Australian countryside has been beaten up in the name of progress.

Driving around the outskirts of Melbourne, I see hundreds of bulldozed Eucalyptus trees, lying dead between the road and the nearby railway line. Yet looking across the tracks, there’s line of tall trees. The contrast is striking.

I climb onto the roof of the car, legs down through the sunroof. We drive past the destruction.  I shoot it. We cross a railway bridge to the other side. I film a long line of green, leafy trees. As we approach its end– WHACK – the last tree topples as a bulldozer knocks it flat. We stop. I leap off the car and run over to the bulldozer.

“Why did you do that?” The driver doesn’t seem to care that I have a film camera on my shoulder.

“These trees are too tall and scraggy. I’m doing a public service.”

“You enjoy your work?”

“Too right. I rev. up the engine and I say ‘You ugly bastard, you’re for it, mate!’ Then I hit the stupid thing as hard as I can. Look over there – the other side of the tracks. Doesn’t that look good! I did that. Beauty.”

The program is broadcast. Newspaper columnist, Nan Musgrove writes: What a shame Stefan Sargent had to spoil his documentary by using an actor to play the part of a bulldozer driver.

Sorry Nan – he is a real person. Scriptwriters and actors aren’t that good.

ASPIRIN + PHENACETIN + CAFFEINE. Next, Barry Melrose, the advertising manager of an Australian headache powder, Vincent’s A.P.C, phones me at Channel 9. 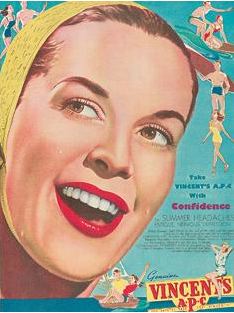 “Was the bulldozer driver real or just an actor?” asks Barry.

Convinced, Barry wants me to make a 30 second TV spot with a “real” person talking about headaches. He’ll pay me the money he was going to spend on the agency produced commercial. Great! It’s double the amount I get for my 60 minute docos..

My assistant Rosemary and I wander the streets of Sydney looking for likely victims. We shoot interviews with taxi drivers, construction workers, pedestrians – no fun.

We are in Circular Quay, near the half finished Sydney Opera House, there’s a double decker bus parked nearby. I walk up to the driver – camera running.

“Hi, I’m making a commercial for Vincent’s A.P.C – do you get headaches?”

He leans out the window and looks directly at the camera, “I’ve been driving buses 30 years on and off. I get headaches but I always carry Vincent’s A.P.C …”

It’s true. He really has packets of Vincent A.P.C behind the steering wheel. Back at base, we wait for the film to be developed. It’s perfect – better still his unscripted, impromptu, one take, speech is exactly 27 seconds, leaving three seconds for a product shot.

My client can’t believe it. Neither can I. Vincent’s block book the airtime and run it for years. Many viewers in Sydney know every word.

The bus driver, Bruce Lithgow, becomes an instant celebrity and appears on afternoon talk shows. Eventually Bruce has a show of his own. His gimmick: he only has real people – no celebrities or authors. His researchers track down my bulldozer driver.

Sadly Bruce stops being real. He’s a TV star. It’s all my fault.