Posted on February 2, 2009 by Stefan Sargent

I know I’ll fix the M-Audio thingy that lets me monitor 5.1 audio. I spent a small fortune on the three Event Studio Precision 6 active monitors and the middle one is just sitting there unused – an embarrassment. Dolby 5.1 here I come!

I met Ray, himself, at NAB, maybe in 1978. “Ray, what are you doing here by yourself?” “Someone has to be here – they’re all at lunch.” “I just bought six of your units for our new Ampex 1” VPR2 inch machines – they really need noise reduction.” “Bad?” “No, unacceptable.” “My guys should get onto to that – thanks for the tip. Ampex VPR2, is that right? ” “My pleasure, Ray.” And thus Dolby noise reduction was built-in to all 1” C format machines.

THOSE WERE THE DAYS. 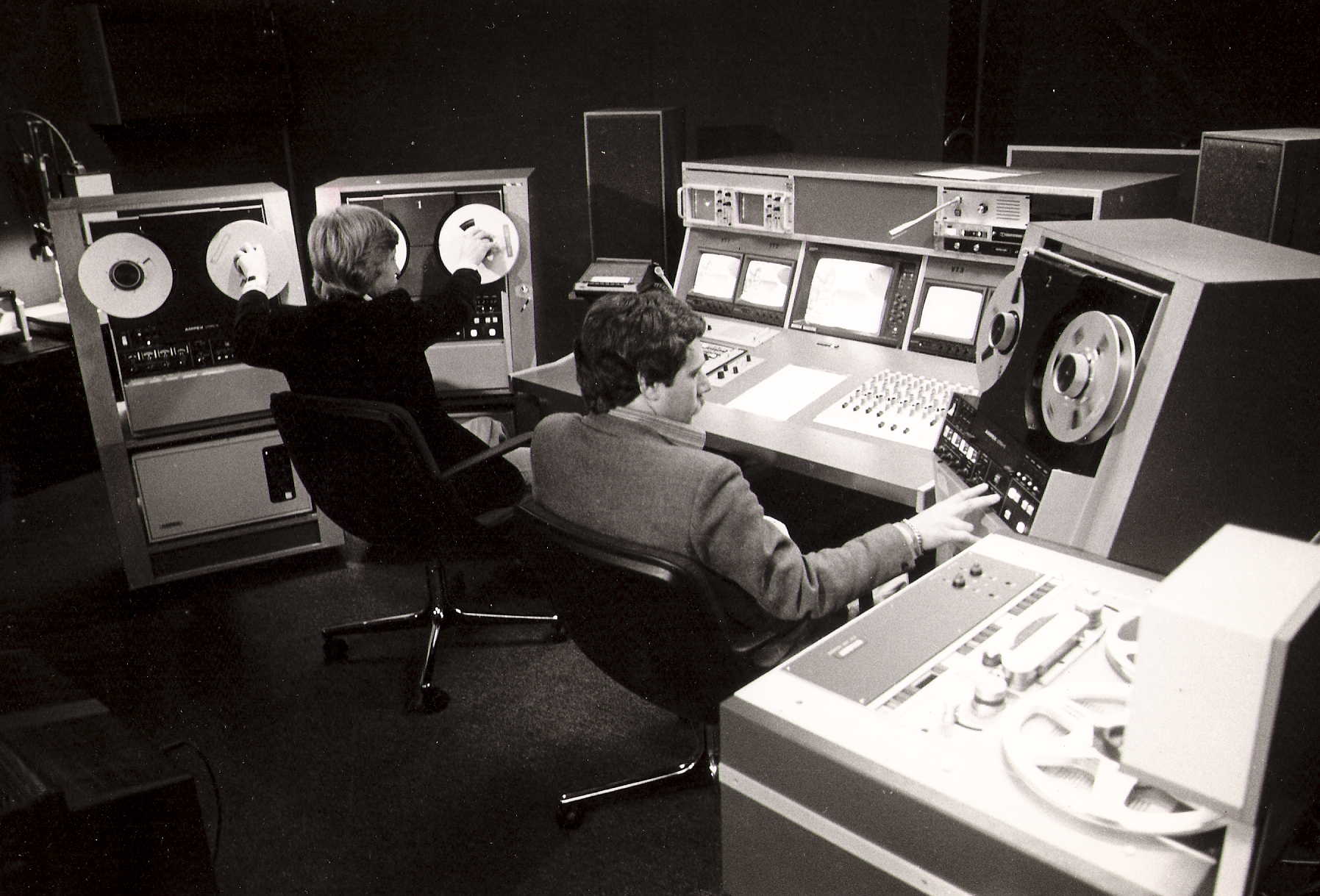 Three Ampex VPR1 machines at my London facility circa 1978

In the old days when I had neat and tidy video facility companies in London, I’d pick up the phone and call the engineering department. “Martin, Studio B, we need the Dolby 5.1 working.” “Yes boss, I’m on my way.” I’d wander off to a Soho tapas and wine bar knowing that Martin and his team would sort it all out.

Firewire toy stopped for no reason at all. I pulled it out, put it on a shelf and went back to old fashioned stereo. In the corporate video world no one gives a rat’s tooth about 5.1, so why bother?

I power it up and bingo it works again. Damn, I can’t move my dialog to Ch. 3, the center track. I create a new timeline. Yeah, that has all six channels. Copy and paste my old timeline on to it. Move dialog to Ch. 3. Success! I have 5.1 or let’s be honest – I have left, right and center, that’s Dolby 3.0.

HUH? WHERE’S THE PICTURE GONE? But what’s this? My Sony HD monitor, fed from a BlackMagic card has no picture. I’ve got Dolby 3.0 going like a dream but no video. Da little red lights on the monitor say that the signal has gone AWOL. I check the usual culprits. No dice. It should be working but it ain’t. Nada.

It’s grim down here under the table. Lots of cat fluff. She likes the heat of the MacPro fans. What a mess. Two Sonnet enclosures with 5 drives each. An OWC eSATA case with two x 1 TBs. A Drobo box with 5 TBs.

The two Apple Cinema Displays, on the desk up above, have spare USB and FW wires going … nowhere. The breakout from the BlackMagic card has an incredible 14 separate wires and connectors. Fourteen! I use only three, the other 11 are wrapped around a jumble of wires. Nothing for it – rip everything out and start again.

Wires, cat fluff, redundant power leads, my lost USB microphone … out, out, out!

SCOUT TO THE RESCUE. 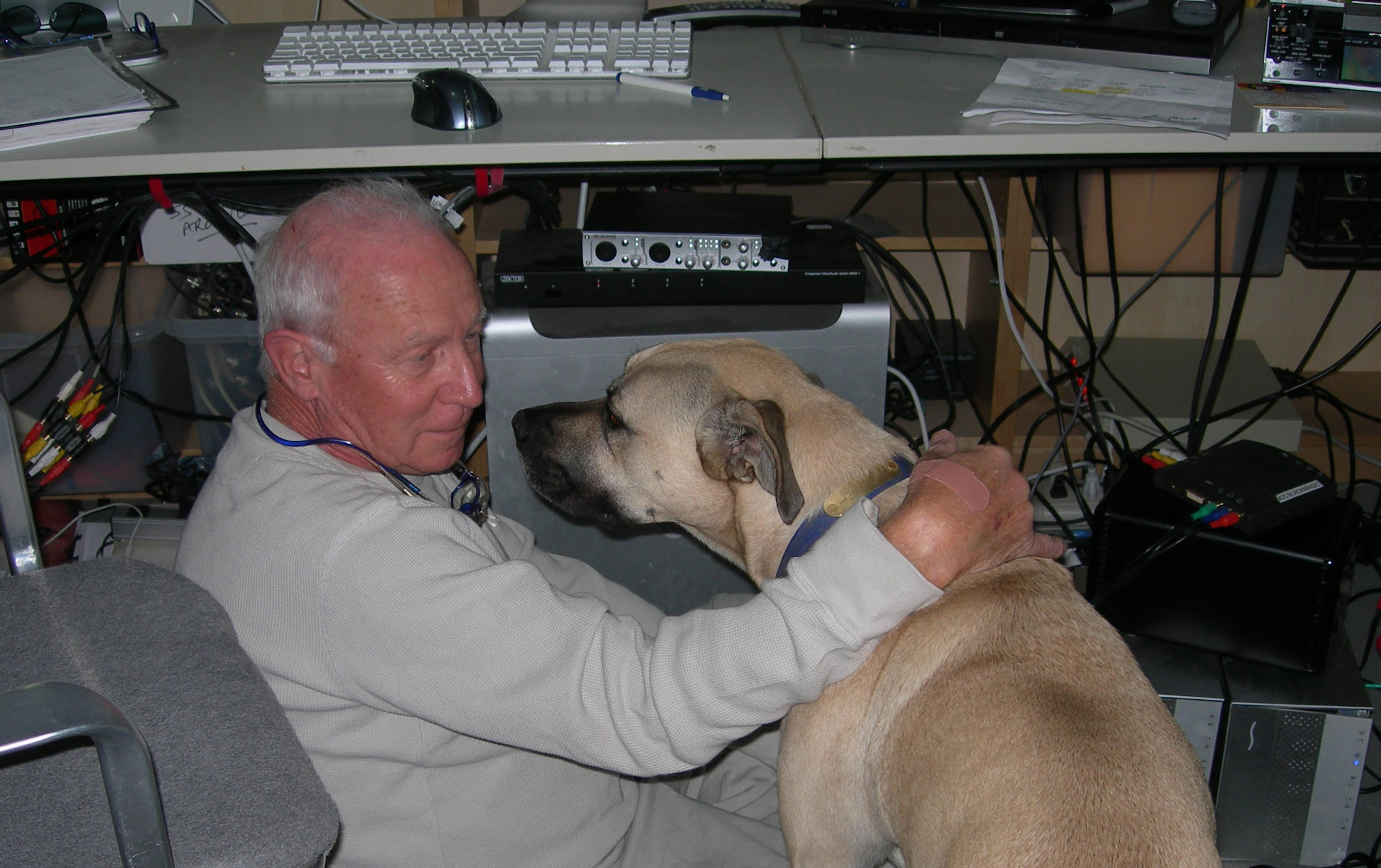 Scout and me under the table of my lifeless edit suite

The downstairs tenant’s dog, Scout, arrives. The owner’s gone to work; I’m wirer-upper and dog sitter. My wife’s friend, Carolyn, takes my photo. They both go out to lunch, laughing. Big joke. I’m left alone on the floor with Scout. Whaaaa! Come back Martin.