My favorite things from The Slime of Mucus — not cameras, tripods or lights but the interesting, nitty-gritty things that never get any glory. In no particular order, here we go: 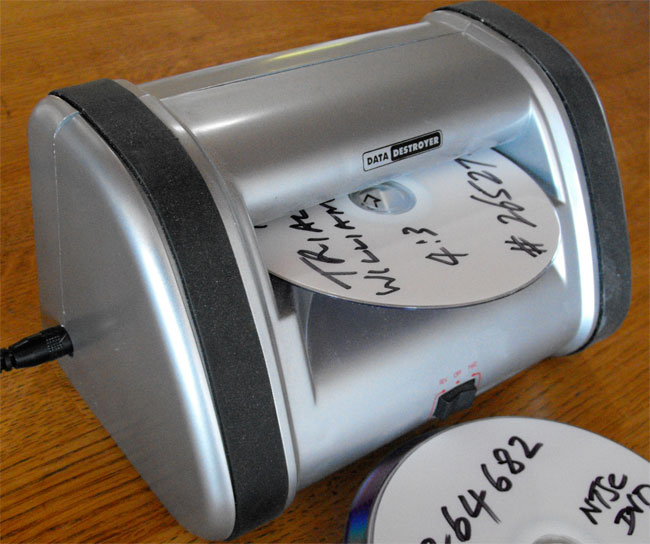 The video jobs I don’t write about are internal meetings, new products – stuff that’s confidential. My clients don’t want it in DV magazine nor on a dud DVD.

Often it’s not my fault – the guy we filmed last week just got fired – “Take him out.” Damn, I already made 25 DVDs.

Death and destruction: Yes, please. The Norazza DD3000 does the job. Zzzzzzzz-zing! Boy, that feels good! I bought mine for $42.50 from Adorama.

How about hard drives? Enter Norazza’s model DD9000. Insert the drive, press the green button. In 10 seconds, there are four holes drilled right through the drive. What fun. See the truly awful YouTube video.

FOLDING STEP STOOL
I’m 5’ 10” – the head of the Trust for Public Land is 6’ 4”. I want the camera to be on eye height. Up go the tripod legs but I can’t see through the viewfinder. Just as well we always pack folding steps. 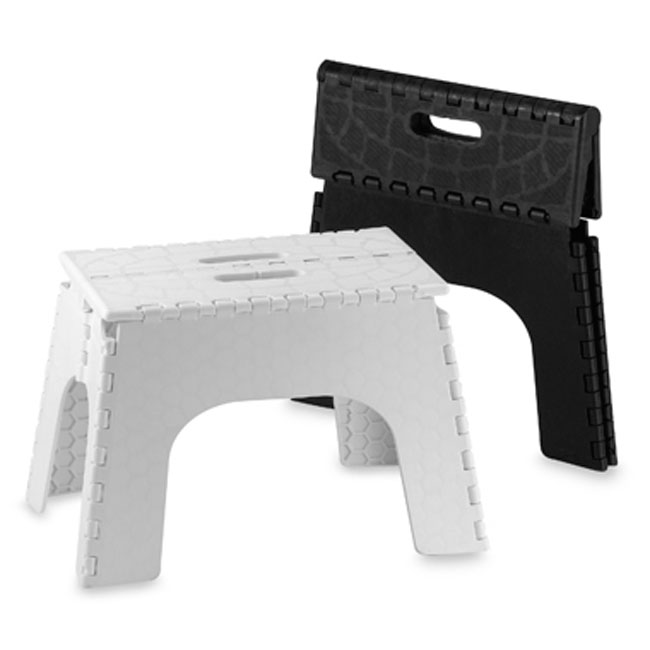 You can buy these babies on line at Markertek.com but go to Bed Bath & Beyond where they are a little cheaper.

ALL HAIL THE DOUBLE A!
A year ago I would have told you that lithium batteries are the way to go. I WAS WRONG!

Sure, lithiums last a zillion times longer than your average AA or PP3; so long, that you believe they’ll last forever. Then right in the middle of a shoot, the radio mike dies. Gone! No warning. Nothing. Just eerie silence. The mike transmitter is on the speaker. He’s way over there, up on the stage. You’ve had it with a capital “F” and a lower case “d.”

After a mega disaster, I give up on lithium. Buy the cheapest batteries I can find – Ikea, Rite-Aid, CVS – use ‘em once then give away to friends, relatives, passing strangers… “Like a used AA?” Maybe I should go rechargeable… 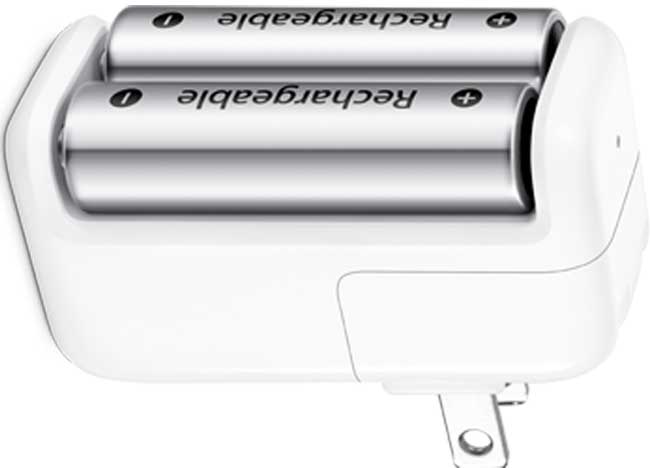 Here’s Apple’s $29 “low vampire draw” AA charger. Vampire draw – whoever thought of that? Take a prize. Means that once the NiMH batteries are charged, the input power drops down to almost nothing. According to Apple’s hype, the old fashioned chargers keep sucking away – even in daylight. Suck, suck, suck…

But my radio mikes use 9 volt PP3s. An Apple PP3 charger? Not a chance, as no Apple keyboard, mouse or touch pad runs on PP3s. Nope, I’ll pass on Apple.

BLACKOUT FOIL AND GAFFER TAPE
There’s a lot written about lighting but very little about removing light or “negative fill.” Pulling the curtains often isn’t enough. And what if there are no curtains? 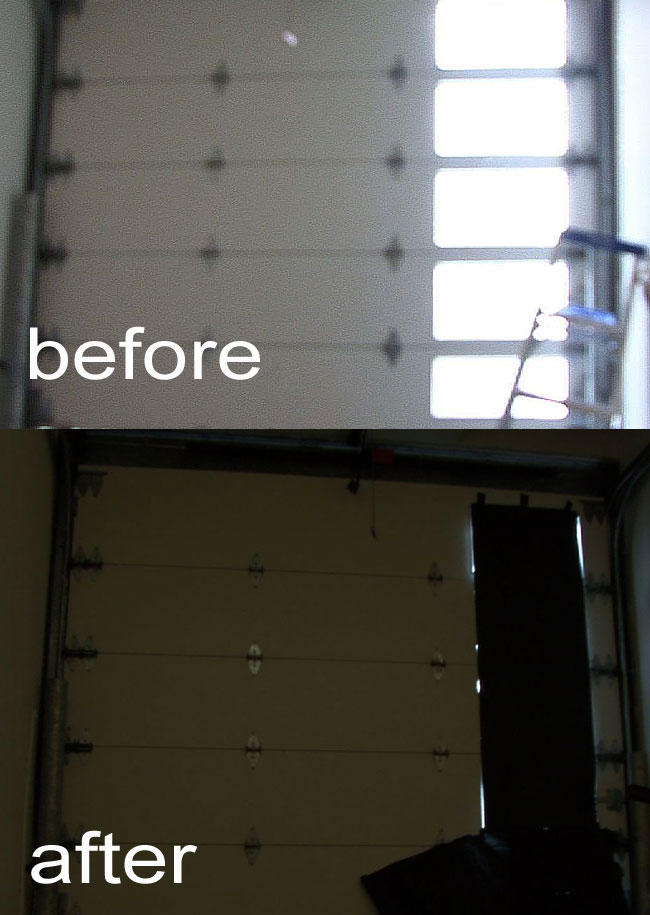 I won’t go out without black foil and a roll of gaffer tape to hang it up.

Black Foil 2’ x 25’ is from FilmTools, while Markertek has a great deal on gaffer tape.

X-KEYS PROFESSIONAL
Colored “editing” keyboards are for wimps. You can buy them configured for FCP, Premiere Pro and After Effects. But please don’t.

Here’s the problem. Take the letter “V.” In FinalCut Pro: ⇧ (shift) V is PASTE INSERT, ⌃ (control) V is ADD EDIT, ⌥ (option) V is a PASTE ATTRIBUTES, ⌥ ⌘ (option, command) V REMOVES ATTRIBUTES, ⌘ V is normal PASTE. And V by itself SELECTS the edit point closest to the playhead. It’s impossible to put all that info onto one keycap and still have the symbol V showing.

A great resource for shortcuts is here – not only FCP 7, but for Avid Media Composer 5, Motion 4, Color 1.5 etc.. Thanks to Zak Ray who put it together.

I’ve memorized most of the usual commands and mapped the exotic ones, like EXPORT USING QUICKTIME CONVERSION to function keys – on my keyboard, it’s F13. I could map four more events to F13 using ⇧⌃⌥ ⌘ modifiers but that would fry my brain. No worries. I’ve found X-Keys. 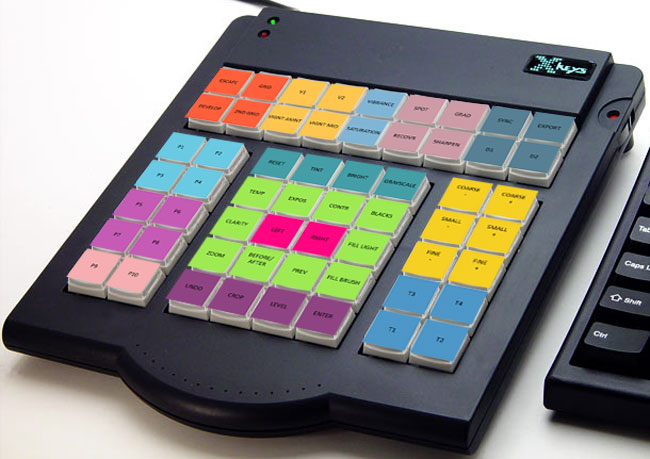 I started with the 24 key version – soon realized 24 wasn’t nearly enough. They took it back and upgraded me to the 58 key USB “Professional.”

Grab a short cut, say ⇧ K, program it into X-Keys software. Bingo, one key does GO TO NEXT KEYFRAME. Click! Another key takes me back to the previous keyframe.

Now with X-Keys, I just press one button. Done. What a boon for the busy editor.

If you’re right handed, put X-Keys to the left of your regular keyboard; that way your right hand stays on the mouse. P. I. Engineering also makes foot controls. Now you can edit with two hands and both feet!

Buy from P. I. Engineering. Their software is for both Windows and Mac. Yes, Jerry, it works on Windows Premiere Pro.

MY KC&CO BOX
Here are four XLR barrels that I keep in my “Keep Calm and Carry On” box. 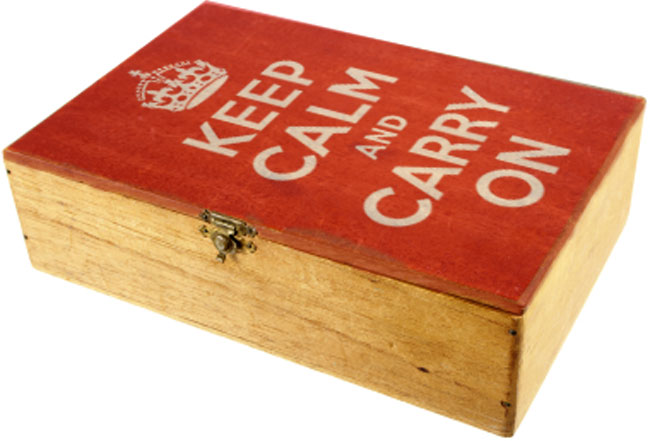 XLR MALE & FEMALE GENDER CHANGERS
I am at a huge hall in San Francisco and the PA guy offers me a feed. He’s been on staff forever and is a real old pro. Unwinds this long audio cable with a female XLR connector on my end. A female XLR? He must know my camera, anyone’s camera, needs a male.

Out with my KC&CO box. I quietly add a male to male gender changer.

I had an engineer in London who would purposely re-patch monitor YUV feeds into YVU. Instead of calling him in, I’d fix it myself. “Everything OK?” “Fine, Les, no problems.” Used to drive him nuts, especially when I put it back to UVY.

I always carry male to male and female to female XLR gender benders. Buy them via Google. Cheap as dirt.

XLR SESCOM IL-19 AUDIO HUM ELIMINATOR
It’s so easy to pick up hum on a location shot. Often you can’t hear it on your headphones. You can remove hum in post with filters but it’s far better not to record it.

I’m lazy. Here’s a snip of the maker’s copy: The CEntrance MicPort Pro is the easiest way to capture a professional-quality vocal take, communicate with clarity over Skype or record studio-grade instrument samples. Much more than a simple XLR to USB adapter, the MicPort Pro is the only portable mic preamp with a built-in, 24bit/96kHz, broadcast-quality A/D converter.

I use it for recording voiceover straight to my MacBook. There are cheaper units but this one is the best. Read the review in DV here.

I am recording Terry McGovern, a professional voice over talent. He really wants to work close to the mike and let it all come out! Sounds distorted in the headphones. I’ve never had any actor overload the system. I didn’t believe my ears but overload it, he did! Go Terry!

I call it my Terry pad.

HYPERMAC BATTERY
I don’t know about you, but my ambition is to work on location with as few power cables as possible. None would be good.

I love my radio mikes. No wires. I usually run my cameras from batteries even if there’s nearby power. No wires.

My HyperMac battery runs my laptop for 15 hours. No HyperMac and my MacBook dies in a couple of hours. Going, going, gone.

All together, everyone, say, “Cool.”

Dear Mr. Sargent, we read your excellent article where you mentioned our 1×1 Bi-Color variable color temperature Litepanels. We’re thrilled and would like to send you, no charge, four Litepanels with complementary batteries. Keep up the good work!