THE GREATEST MOVIE I NEVER MADE

Posted on December 3, 2010 by Stefan Sargent

WHAT DID I DO RIGHT? 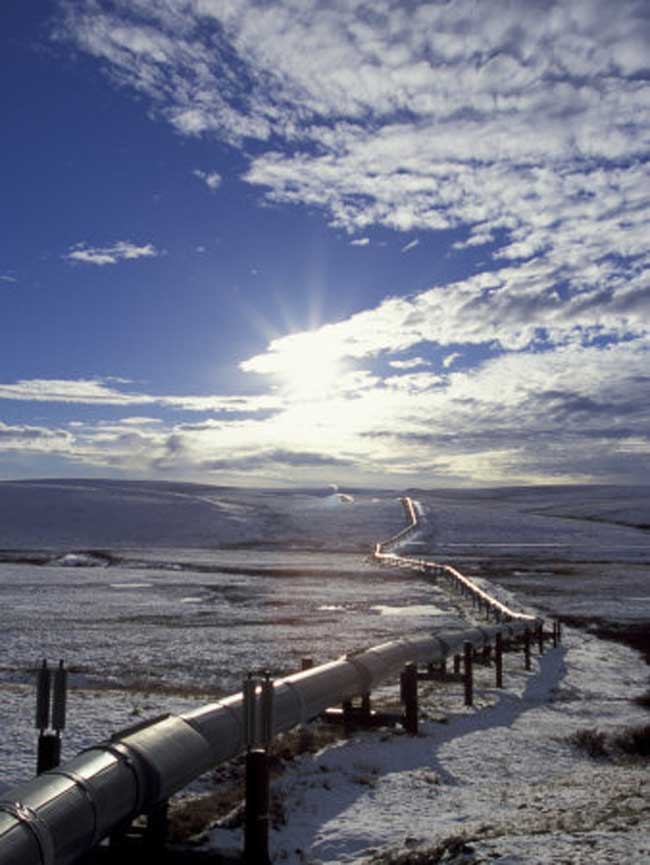 It’s the spring of 1969. I’m on the North Slope of Alaska, doing research for a BP sponsored documentary. Outside it’s -10°F – that’s -23C. Brrrr… but inside it’s warm and cozy. Tonight I’m with a scientist from Schlumberger, one of the many contractors on the site. He’s trying to explain to me how oilfields are discovered.

It’s all gobbledygook, way over my head. Writing this, 40 years later, I can’t remember the details: was it a big room, small room, was he tall, or short, was it during the day or at night? I forget.

What I do remember is this: suddenly his instruments go crazy. “Hey, did you see that!” “There’s a wiggle.” “That’s not a wiggle – that’s an oil field!” He races to the phone. “Bill, we’ve got one. Looks massive!” Phone down, he’s back, staring at the graph; now singing a little song, “We found an oil well, we’ve found an oil well…”

I’m gob smacked, this is real, the birth of an oil well; the look on his face and the childish song, say it all.

TWO MONTHS EARLIER
January ’69. I have just arrived in London. I bring with me my commercial reel and a couple of Australian documentaries that I’ve shot and edited. I’m told my commercial reel stinks (or words to that effect) – however my two docs. are much admired.

In the late ‘60s, UK corporate films are shot with crews of ten or more, often in 35mm. I turn up with my own Éclair 16mm camera and my young lady sound recordist with a couple of radio mikes and a Nagra III recorder. That’s it – just the two of us, Tricia and me… un-heard of.

I have a screening at the Producers’ Guild. Not really a guild but a collection of one man production companies, all sharing the preview theater and secretarial services. The boss man Geoff Busby wants me to move in too. I can’t see myself in a suit-‘n-tie office and politely decline.

Geoff arranges another screening of my Edge of the Outback film for Humphey Swingler of Greenpark Productions and Roly Stafford, head of films at BP. When the lights come up, both are ecstatic.

“Terrific! Makes our ‘Cattle Carters’ look phony, yours is so much better. You’ve got to to shoot our next production – it’s about the Alaskan pipeline . You’ll need to go to Alaska every few months once construction starts. It’s men only up there. No women allowed. Can you do the sound as well?”

In the ‘50s, Roly used to be Humphrey’s cameraman. I can see they still work well together. Over the next few days, I’m in the Guild’s screening room, watching the Cattle Carters, The Algerian Pipeline, North Slope Alaska. Ho hum… they are straight, dead serious, 35mm color, shot on a tripod with grandiose narration and composed mood music; yuk, not my kinda of filmmaking!

I’m an on-the-shoulder, get-in-close, take-one shooter. They must know that from watching Edge of the Outback – real people, real sound, no mood music.

AK-69
Anchorage is still showing the signs of the disastrous earthquake. Humphrey, Roly and I are staying at the best hotel in town and receiving numerous visitors. I’m introduced as the greatest thing since Jean-Luc Godard. There are meetings everyday. At night we go to BP parties.

I meet Joe Rychetnik. I’m told he’s a Time-Life photographer. I later discover he’s an American Mountie, a bush cop, a pilot and a killer-diller hunter. He wants to get in with BP and thinks I’m the key. Could be useful, I’ll need help. 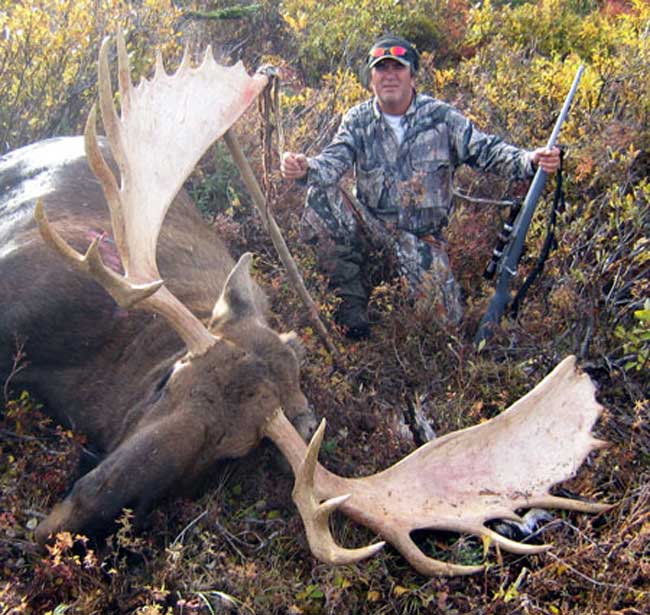 Joe invites me to his place the next night. “Do you like moose?” “You bet, my favorite.” I’m thinking Chocolate Moose dessert. Joe takes me into a hallway where there is a huge deep freeze. Opens the lid. Inside, an intact frozen moose; minus antlers and legs. Gulp. Welcome to Alaska.

After a week in Anchorage, Roly and Humphrey fly back to London. I’m on my own. The local BP man wants me to see the sights, get to know Alaska. I see the plans for the pipeline, models and maps. At night, I go to a noisy anti-pipeline meeting. The next day, I’m in a chartered plane flying around Mt. McKinley. I spend time in Fairbanks. Go to the university there. Meet caribou and polar bear experts.

NORTH TO ALASKA – AND THEN SOME 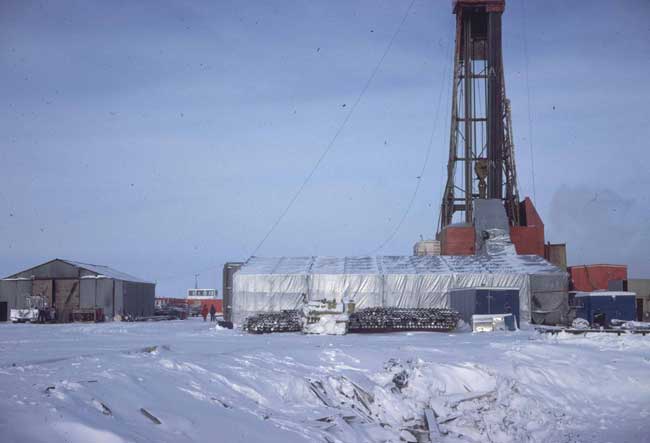 Eventually, I’m flown to Prudhoe Bay. We land on ice. Everything is white. I’m shown my room. Given my out-of-doors Eskimo parka. Told never to go out alone. If I’m in a car, stay inside or keep close to a colleague. White-outs happen all the time. It’s cold, very quiet and a little scary.

Just as they told me, it’s all men – 2,000 of them, living in centrally heated luxury in the middle of nowhere. Movies are running day and night. Food and ice cream in abundance. The oilmen are all from Texas. They work 12 hour shifts, seven days a week, then fly home to their cattle ranches. Wow! This is going to be a great movie.

BP HEADQUARTER’S BUILDING – LONDON
A month later, I’ve written a treatment. It goes something like this:

This is the story of five real people: a scientist looking for oil, an oilrig worker who has a ranch in Texas, a naturalist who is studying the caribou, a pipeline designer/engineer and a builder on the pipeline…

Roly looks up from reading my treatment.

“It is true Roly, it really happened! It was a wonderful moment. I can do it. I’ll make it happen again. I want to make it real. Just trust me.”

“Stefan, I’ve been in the film business for 30 years and I can honestly say – THIS IS THE WORST SCRIPT I HAVE EVER READ.”

SAVED
The phone rings. It’s Humphrey. “How’s the script going?” “Not good. Just facts and figures.” “Don’t worry. The environmentalists have won – the pipeline has been delayed – maybe forever. The film is off. Don’t tell Roly, but I think your original concept was the right way to go.”

EPILOG
1971 – BP, Humphrey and Roly make Alaska – The Great Land. I saw it – not a mention of the proposed pipeline, just a sop to the Alaskans. 35mm color, soaring music, ghastly commentary: “Alaska is a lonely land of daunting distances and haunting beauty, once a frail foothold on a cruel coast, now part boom and bustle and part wrapped in the dream of the past.” Yep, that’s the god-awful script Roly approved. I couldn’t write tripe like that for love nor money.

1973 – There’s an oil crisis. OPEC puts an embargo on oil production and increases prices by 70%. Heck, we need our own oil! Environmentalists – who needs them? Build the pipeline ASAP. 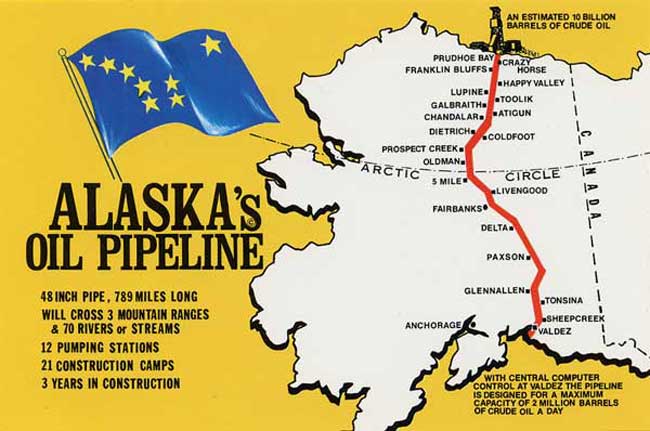 1977 – It’s built and BP makes Pipeline Alaska. The job goes to UK writer/director John Armstrong of Pelican Films – not to Humphrey or me.

What did I do right?